Many critics have pointed to the Springboks’ decision to kick front-foot ball away in the closing stages as the reason for their defeat. 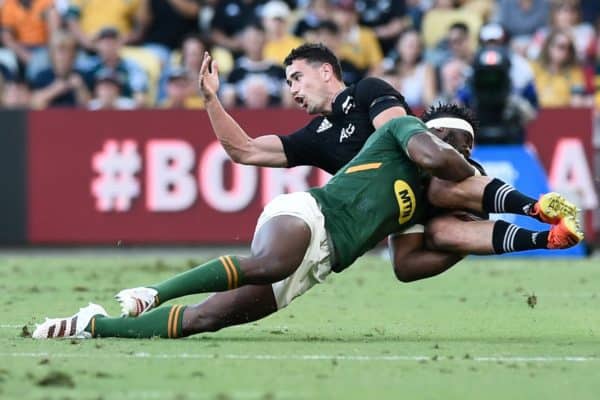 Springbok captain Siya Kolisi manned up to his team’s recent problems on the field with a heroic individual effort against the All Blacks on Saturday, so it was little surprise that he was very much in touch with his emotions after a match in which he gave so much but still ended on the losing side, thanks to a late New Zealand penalty.

The flanker dashed around the field with focused intensity on Saturday and was particularly useful at the breakdowns, doing a lot of the dirty work as he and Kwagga Smith formed a great partnership. But as much as he led from the front, Kolisi was not able to drag his team across the line as they went down 19-17.

“It definitely hurts. We prepared as well as we could, we were focused on the right now,” Kolisi said after the match.

“I felt on the field that we were in there with a good chance – our set-pieces dominated – so it is really hard to lose a game like that, but we know that if we stick to our processes then the results will come.

“We wanted to stand up and fight today. We knew as a team what we are capable of and it was about making sure we played properly.

“New Zealand brought high speed and physicality, but I can’t fault my team. Our plan worked, our structures were really good, so I don’t really know what went wrong.”

ALSO READ: Wallabies crush Pumas to make it three in a row

Many critics have pointed to the Springboks’ decision, after they had taken a 17-16 lead into the last 10 minutes, to kick front-foot ball away, including two up-and-unders from the All Blacks’ 22, as the reason for their defeat.

Kolisi said this was the choice of the players and he stood by the tactic.

“The players made that call. We decided to stick to the game-plan,” the skipper said.

“That’s how we know how to play and we will never change from that.”