Stormers ready to ’empty the tank’ against Dragons

What has been most pleasing from the Stormers in their opening three games in Europe has been their flair on attack. 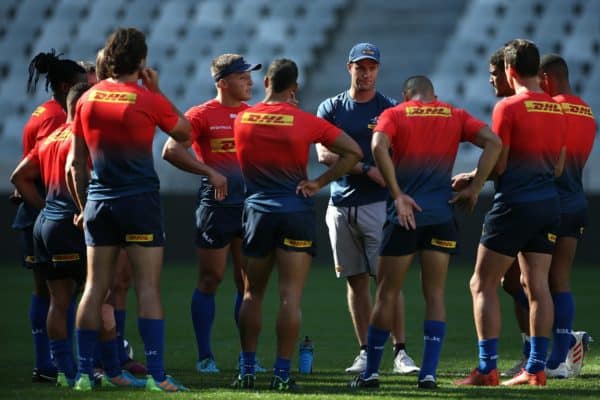 The Stormers are gunning for their first scalp of the United Rugby Championship when they head to Newport to take on the Dragons at Rodney Parade Park on Friday evening.

After two losses and a draw in their first three games, the Stormers are fired up to finish the tour on a high with a solid win before they head back to SA as the sides break for the November international window.

“We are going to empty the tank, so whatever it takes to get the result on Friday night, that’s important for us and our focus is solely on that,” said Stormers attack coach Dawie Snyman.

“We have played some good rugby, although we haven’t got the results we have wanted. It’s actually been a good tour for us. The guys have stuck together and we have been building nicely, but what is important is the results, so we won’t leave anything out there.

“It’s going to be a difficult game. It is never easy to come to Newport – they (Dragons) are very good at home, they are a very physical side and we need to be up for it.”

What has been most pleasing from the Stormers in their opening three games has been their flair on attack, impressing with ball in hand and showing some great skill in the offload, which has led to a number of tries for them.

Particularly in the matches against Munster and Edinburgh, some fantastic offloads led to important tries, but the Stormers have just not been able to sustain that play for a whole game and are still targeting an 80-minute performance.

“We are scoring some nice tries and making nice inroads when we have the ball, so there have been some great signs,” Snyman said.

“Obviously there are one or two opportunities we are still missing out on, and if you look at the possession we have had we are quite low on the stats at the moment, but what we have grabbed with what we’ve had, they are good signs.

“The players understand what we want to do and how we want to play, and they are allowed to go out on the field and express themselves, and you can see they’re really bringing that to the party.”