Coach Jacques Nienaber is catching up on time and Tests lost due to the cancellation of matches in 2020. 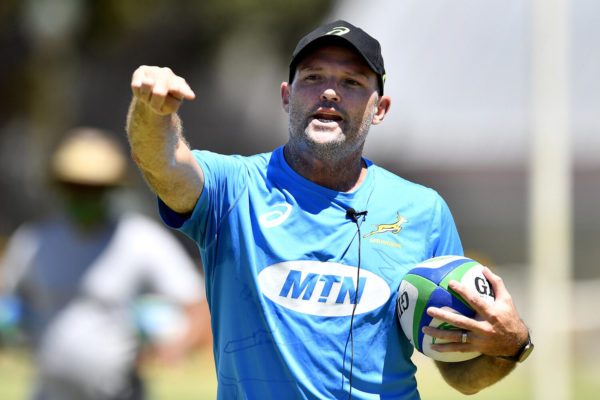 Springbok coach, Jacques Nienaber says he is building consistency in the team and will thus stick largely to the same players he's used this year for the three Tests in the UK next month. Picture: Ashley Vlotman/Gallo Images

In previous years the Springbok end of year tour has often been used to blood new players and give fringe squad members a decent run to prove themselves, however this year will be different with Springbok coach Jacques Nienaber targeting consistency as the main goal.

With a full year of international rugby lost in 2020 due to the Covid pandemic, Nienaber sees his side being behind other teams in terms of preparation for the 2023 World Cup and thus believes it is more important to fully back the current crop of players.

“Where we are currently after the World Cup (2019) is we have only played 10 Test matches, because we lost out on 2020 due to Covid,” explained Nienaber.

“So if you think about it, two years have gone by with only 10 Test matches played, so the key thing for us is to build consistency again. Consistency in our group, in our performances, in our preparations, so I don’t think there will be any surprises in terms of team selection and what we put out.

“Obviously in saying that nobody is irreplaceable in our squad and there is so much good competition that the guys have to perform.”

The Springbok squad is also looking forward to a much more relaxed tour in terms of consecutive matches following a massively physical and mentally challenging two tours earlier in the year.

After starting off against Georgia in one Test at the start of July with the second called off due to a Covid outbreak, the team went into a tough five Test run from the end of July to late August as they played the full Lions series and first two Rugby Championship matches against Argentina on successive weekends.

The team then had a three week break, two of which were spent quarantining in Australia, before they went on a four match Test run, playing twice each against the Wallabies and All Blacks on successive weekends to end the Rugby Championship.

Now after having a good few weeks off to recover they face just three games in successive weekends to end off a very challenging year for the team.

“It’s nobody’s fault, it’s just what has happened in rugby this year,” said Nienaber. “If you just look at the schedule normally you would have two Test matches and then a bye week followed by your next two Test matches.

“So it has been tough but is just how the cards have landed unfortunately with Covid. It isn’t normally like this so from a player welfare point of view physically that’s why we have a number of injuries. Mentally it’s been tough as well, but we are stronger as a group because of it.”