Dobson insists there’s no place for ‘complacency’ in Stormers’ minds

"We fully know the dangers of this game and the importance of this match to them and us." 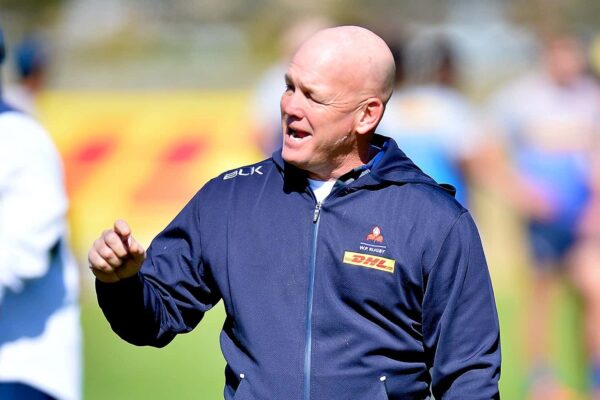 Having moved into second spot on the United Rugby Championship log and currently on a six match winning streak, the Stormers insist there is no chance of complacency creeping in despite facing a weakened Leinster side at the Cape Town Stadium on Saturday.

Coach John Dobson explained in a pre-match press conference that the team was fully focused on winning their final two pool games and finishing as high as possible on the URC log.

“Complacency doesn’t even cross our minds. From where we were a year ago as a union to where we are now, it’s so important for us to stay focused,” said Dobson.

“I don’t want us to get ahead of ourselves but we have the chance of finishing in the top two of the URC and hosting a semifinal in Cape Town which would mean the world for both the team and impact on rugby in the region, so we are as desperate as ever.

“We are also acutely aware that this young Leinster team was a ‘tough call and held-up’ away from beating a nine-Springbok Sharks team in Durban.

“So we fully know the dangers of this game and the importance of this match to them and us. In terms of the level of rugby it’s an on merit, one-versus-two clash with lots to play for.”

Leinster’s place at the top of the URC log is still relatively safe, as regardless of the result against the Stormers they can still seal top spot with a win in their final pool match against Munster.

However, their young team will have a point to prove after just being edged by the Sharks over the past weekend and they will be going all out to upset the in-form Stormers.

“I think they will be a little bit different because of the conditions. They will be much better organised with their maul defence and at scrum time. We don’t expect to get as easy a ride as the Sharks did in those areas,” said Dobson.

“Obviously they’ve made it clear they want to pick up some areas of their kick chase as well. So I think the conditions being drier will give them a chance to play their multiphase rugby which they are known for and that’s what we are expecting this week.”

The Stormers will also be handing a debut to emergency loan hooker from the Cheetahs, Wilmar Arnoldi, who will play off the bench on Saturday.