Xamlashe has previously led the team on occasions during the season when Otto hasn’t been on the field, so he is no stranger to the role. 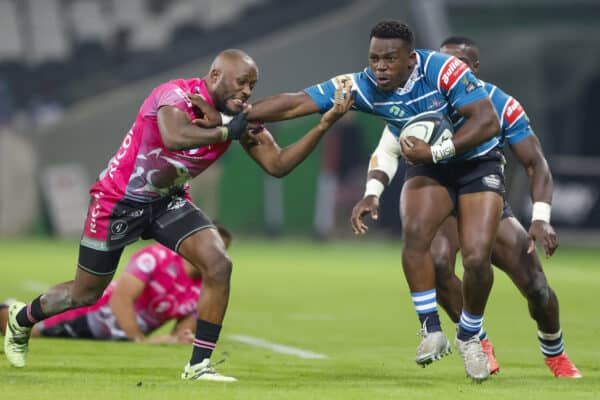 Sango Xamlashe will captain Griquas in the Currie Cup final against the Pumas on Saturday. Picture: Dirk Kotze/Gallo Images

Hosts Griquas will be without inspirational captain Niel Otto for their Currie Cup final against the Pumas at Griqua Park on Saturday (kick-off 3pm) after he was ruled out of the match through concussion.

Otto went off during the first half of their semifinal clash against the Bulls and was unable to recover in time, with Werner Gouws coming in to take his place, while outside centre Sango Xamlashe takes over the reins for the game.

Utility back George Whitehead, who has played a few starring roles in recent games including picking up the man-of-the-match award against the Bulls, will start at fullback, coming in for Ashlon Davids who was injured early during their semifinal.

“Niel is gutted. It’s obviously been a tough few weeks for him. His dad passed away last Wednesday before the semifinal against the Bulls and he really wanted to play for him and make his dad proud,” explained Griquas coach Pieter Bergh.

Xamlashe has led the team on occasions during the season when Otto hasn’t been on the field, including for most of the semifinal, so is no stranger to the role.

He has also captained in a final before, when he led the Tuks Varsity Cup team to the title last year, and will be fully aware of the pressures that come with the role.

“There is a lot of experienced individuals in our team and I do share the responsibility with the leadership group as well. There are a lot of journeymen that have done this before, so I don’t feel like there is too much on my plate that I can’t handle,” said Xamlashe.

“It helps that I have captained in a final already. This is obviously a different kind of magnitude of pressure. But being able to relate to this kind of situation you know the right guys to go to when decisions need to be verified, and the assistance that you might need on the pitch,” Xamlashe added.

“So I don’t feel like it is going to be a heavy task on myself, there are some very good experienced guys in the team who will assist me.”