I worked on players’ mentality – Heric

New Cape Town All Stars coach Vladislav Heric says he didn’t bring any magic wand to the team to bring them out of their slump which saw David Kannemeyer being shown the door after just six matches in charge. 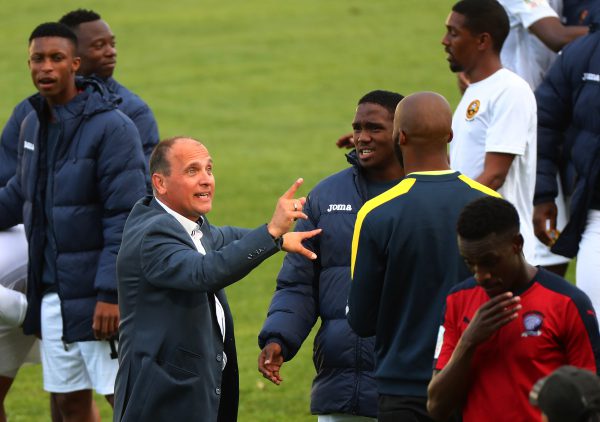 Igugu leKapa had started the season like a house on fire but it fizzled out as soon as it had started. In his first match, Heric guided the team to an unbelievable 1-0 win over Jomo Cosmos playing with nine men for 37 minutes in the second half. Two of his players were shown red cards – one early in the first half and the other at the start of the second.

“I worked on their mentality. It is important for players to be mentally fit. If the mind is willing, the body and everything else will follow suit. This team was organised when I took over, especially at the back and I capitalised on that,” he said.

He also revealed that he felt sorry for Kannemeyer because he took the team and faced a lot of challenges. “Because of the drought here in Cape Town, it is difficult to get a training venue and this challenge might have affected him to some extent,” said Heric.

Mthatha Bucks v Cape Town All Stars, Mthatha Stadium, 3.30pm
Whatever Vladislav Heric did last week to get Igugu leKapa players off their recent slump he will need again when hosting Amathol’amnyama who are blowing hot and cold again this season.
Bucks could have the upper hand with their striker Mpho Erasmus proving to be a lethal weapon for Ian Palmer’s side.

Tshakuma v Stellenbosch, Thohoyandou Stadium, 3.30pm
Stellies could be in for a tiring afternoon in the usually humid conditions in Thohoyandou with Tshakuma having found their groove and proving to be tricky opponents and giant killers of note.

Witbank Spurs v Ubuntu TC, Puma Rugby Stadium, 3.30pm
With three points separating these teams on the log, Ubuntu will seek to move away from the bottom by scoring a rare if not unexpected win over Siyavutha.

Richards Bay v Uthongathi, Umhlathuze Sports Complex, 3.30pm
The Rich Boys surprised many when they managed to eke out a point by holding log leaders Stellenbosch to a goalless draw away last weekend. This should have brought back some confidence in the players. But Uthongathi are also fresh from a good win over Witbank Spurs and this KwaZulu-Natal derby should produce some fireworks.

Highlands Park v Super Eagles, Makhulong Stadium, 3.30pm
Owen Da Gama has brought a new hope for the Lions of the North and the players have responded well to his methods, winning their last two matches under his guidance. But Super Eagles could be a tricky customer as they have also been doing admirably well.

Mbombela United v Royal Eagles, Kanyamazane Stadium, 3.30pm
This one has potential to be an explosive match as both have found their rhythm and are free scoring. Tingwenyama are riding a crest of a wave while Eagles have found some stability under Zipho Dlangalala.

University of Pretoria v Black Leopards, Tuks Stadium, 3.30pm
It will be a hard afternoon for Lidoda Duvha who have struggled to get into some form of rhythm this time around. Shaun Bartlett’s AmaTuks are in wonderful form and have a good home record so far this season.

Jomo Cosmos v Real Kings, Vosloorus Stadium, 3.30pm
Fresh from an embarrassing 1-0 defeat to a nine-men Cape Town All Stars, Ezenkosi will be looking to make amends when they host Real Kings at Vosloorus Stadium on Sunday afternoon.
Ezenkosi could not get the better of Vladislav Heric’s side besides Igugu leKapa playing most of the second half with just nine players after two red cards – one at the beginning of each half.
The Magic Boys managed to squeeze out a point in their last match with Nkosingiphile Phewa scoring in referee’s optional time against Highlands Parks.