Mosimane tells Khune not to stress about Brockie

Mamelodi Sundowns coach Pitso Mosimane was in a buoyant mood at a joint press conference on Wednesday ahead of their highly anticipated clash with Kaizer Chiefs. 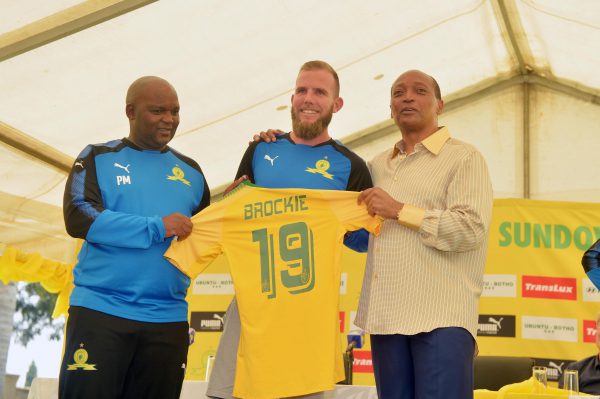 Speaking to members of the media and the Amakhosi bunch sent to represent the gold-and-black team, Mosimane took a dig at Chiefs goalkeeper Itumeleng Khune, who was in attendance when answering a question about whether he would play new striker Jeremy Brockie against Amakhosi.

The January transfer window saw striker Leonard Castro move from Sundowns to Chiefs. Castro scored on debut against Baroka, without questioning Castro’s talent Mosimane says he seen an improvement in the way the Colombian plays.

It is clear that the Caf Champions League-winning coach hasn’t had time to study Komphela’s side having analysed the Amakhosi’s game against Polokwane City, which they played before Sunday’s 2-1 victory over Baroka FC.

“I watched the first half of the Baroka Chiefs game, I will finish the second half tonight, I saw the goal [Castro’s goal], beautiful goal, I have not seen that goal ever since Castro was with us, and even in training I didn’t see it. Unbelievable goal, this means he has something new,” said Mosimane.