Pitso wants Sundowns to have a full go at Chiefs

Pitso Mosimane hates goalless draws and believes it short-changes the supporters when a match ends that way. 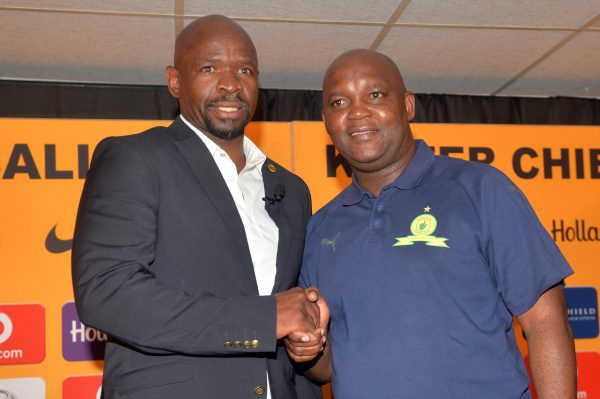 This is why he has urged his Mamelodi Sundowns charges to have a full go at Kaizer Chiefs when they meet in an Absa Premiership at FNB Stadium on Saturday night.

It is a match Mosimane must have mixed feelings about as he has mentioned numerous times that he hates how Amakhosi sit back and defend, opting for quick counter attacks then build up play.
Even Amakhosi’s applausable run of late doesn’t impress Mosimane.

“They do score goals but they are not 100% convincing especially when you go at them like Polokwane City did, like Baroka did in the first half last weekend,” said Mosimane yesterday.
“That system works for them. I don’t think they will change it. We have also beaten them playing the way we like,” he added.

Mosimane enjoys goals, and doesn’t mind if his team concedes so long as they give as good – or better- as they get.

“If the game ends 4-4 it means the game is open and everybody is attacking. It makes for a good story to tell when there have been goals but it would be boring I f the match ended goalless. There would be no story.

“They concede less because they sit back and we concede more because we go at teams,” said the former Bafana Bafana mentor.

Sundowns are five points above Amakhosi and some have suggested that Saturday’s match will have an effect on who will eventually win the Premiership title. But Mosimane disagrees with this notion.

“Why should I worry about Chiefs? I have Cape Town City and Free State Stars also chasing. Had the other teams won at the weekend Chiefs would not be where they are (on the log). No one is consistent and that is why I don’t think this game has any meaningful bearing on the title chase. No coach can at this stage claim they will win the league,” he said.

READ: Mosimane tells Khune not to stress about Brockie