Onyango sends a warning to other Sundowns goalkeepers

"We can't give it to them on a silver platter, they must work hard for it," said Onyango. 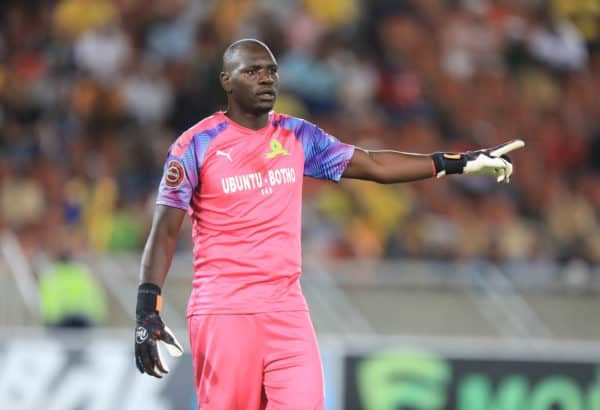 Denis Onyango has warned the other goalkeepers at Mamelodi Sundowns that they will have to work hard to dethrone him from the number one spot. (Photo by Philip Maeta/Gallo Images)

When Pitso Mosimane recruited Denis Onyango from Ethiopian side Saint George some 15 years ago when the now Al Ahly head coach was still calling the shots at SuperSport United, Onyango was a 21-year-old at the time and was an understudy to a couple of seasoned goalkeepers.

He then joined Mamelodi Sundowns and was sent out on loan at Bidvest Wits where he did not play much either.

He was recalled to Sundowns right after Mosimane joined the side and he has been the mainstay in the Downs goal ever since.

Currently, he has about four understudies at Chloorkop in veteran goalkeeper Kennedy Mweene, Ricardo Goss, Reyaard Pieterse and the younger Jody February.

Onyango says these four need to pay their dues and would have to work their socks off if they are to dethrone him from the number one spot.

“We all did not come to Sundowns and started playing immediately. We can’t give it to them on a silver platter, they must work hard for it and I believe that in the coming few years they will be number goalkeepers for Sundowns because everyone has their own qualities.

“They have made me a better goalkeeper this past season and I kept 15 clean sheets, I have never been to that number before and it shows that the goalkeeping department has done fantastic,” said Onyango.

The Ugandan-born shot-stopper, who will go into the new season as the reigning Goalkeeper of the Season, sees a lot of potential in February and Goss, particularly Goss who made just two starts in the previous season.

“Jody and Goss have brought in something different in the team because we believe they have the quality and where they are coming from, they have been winning. Goss was one of the best at Bidvest Wits, he is one for the future for Bafana Bafana and I believe that if he gets more game time he will eventually get more game time. Jody has a future with Sundowns and the national team and for me to be there as well, it pushes me to work hard and it pushes them to work hard as well.”