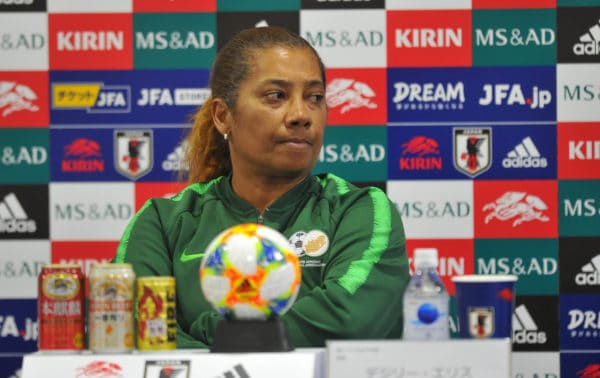 Despite their 3-0 victory over Ghana in their opening game of the Aisha Buhari Cup, Banyana Banyana coach Desiree Ellis says there is still a room for improvement, even though the victory seemed convincing.

Hilda Magaia, Thembi Kgatlana and Sibulele Holweni were in the score-sheet for the South Africans, as they dismantled the Black Queens at the Mabolaji Johnson Arena on Friday.

South Africa were the better team on the day, as they created a number of opportunities to score, but only three could go inside the net, while the Ghanaians found it really hard to break the Banyana defence.

“Look, in the beginning we were a little bit rusty, we haven’t played since April. Some of our players we haven’t seen since 2019. But the other group has been in training. We created a lot of chances, that’s how we are. If we don’t concede, we always have a chance of winning the game. I felt (playing) the ball behind worked very well, but we also showed some combination play and get players through,” said the Banyana mentor.

“As the game went on, we got a little better. In latter stages of the game we managed really well. We know there is another game coming, so we managed the game, we made some changes. Our team is very versatile, so, when we made the changes we looked even better. So, we are happy that we played and got the game behind us after having one session with the players because the overseas based players came in the early hours of the 14th (September). So, we are very happy with result, but there is still a room for improvement for the performance.”

The win for Banyana was a huge confidence booster for the team, with a clash against tournament hosts Nigeria coming up on 21 September.