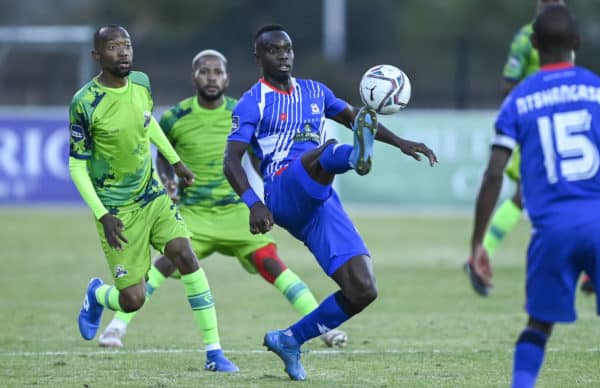 A stoppage-time sizzler from Amadou Soukouna gave Maritzburg United a 1-0 DStv Premiership win over Marumo Gallants at the Harry Gwala Stadium on Wednesday.

The 29 year-old Frenchman spun on the edge of the box and curled a beauty past Washington Arubi to hand Ernst Middendorp’s side a three points that their performance did not really merit.

Gallants, indeed, created the better chances, but were left to rue a glaring miss from substitute Sede Dion.

The Ivorian robbed Maritzburg defender with 12 minutes left to play and had only United ‘keeper Marcel Engelhardt to beat, but fired wide when he seemed certain to ripple the net.

In a dull, cagey first half, former Wits striker Rowen Human had the best chance for Maritzburg, but delayed his shot for too long and it was blocked by the Gallants defence.

Gallants at least forced a save from United goalkeeper Marcel Engelhardt, Celempilo Ngema’s cross-shot cleared by the German’s legs.

The game got much better after the break, and while it was Maritzburg who made a double substitution, bringing on Leletu Skelem and Nazeer Allie, it was Gallants who created the better opportunities.

Katlego Otladisa did well to skip past a couple of United defenders, and set up Letsie Koapeng, but he sliced his effort well off target.

Ngema then supplied a fine long pass, and Allie slipped, letting in Thabo Mnyamane, but he dillied and dallied and United were able to recover.

Skelem did get into a good position in the penalty area to meet a fizzing cross from the left, but Gallants goalkeeper Arubi just got in to palm the ball away.

Gallants then had a fantastic chance to score as Otladisa found himself with just Engelhardt to beat, but the German made an excellent save with his legs.

And in the 78th minute, Ndengane’s howler let in Dion, but while he beat the ‘keeper, he also sent the ball wide of goal.

It was left to Soukouna in the second minute of stoppage time to supply a sublime ending for the home side, who picked up their second win of the campaign.