MaMkhize’s Royal AM fight back to uppercut SuperSport

Royal AM have now gone seven DStv Premiership games without a loss. 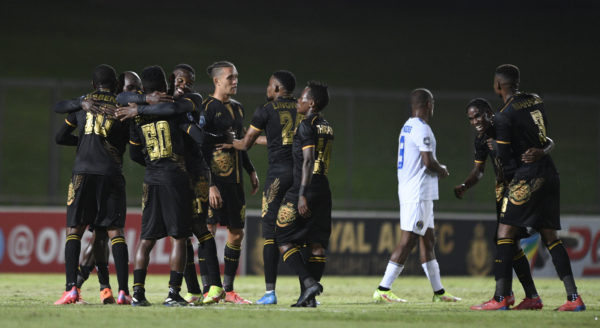 Royal AM celebrates a goal during the DStv Premiership 2021/22 match against SuperSport United on Tuesday at Chatsworth Stadium. (Pic Sydney Mahlangu/BackpagePix)

Menzi Masuku was the hero for Royal AM who displayed a gallant performance to come back from a goal down to beat a 10-man SuperSport United 2-1 at Chatsworth Stadium on Tuesday.

It took the hosts two minutes to snatch all three points as they have now gone seven DStv Premiership games without the bitter taste of defeat.

It all began with Thamsanqa Gabuza as he continued his fine form for SuperSport when he netted in the 30th to make sure that Matsantsantsa A Pitori went into the break with their noses in front.

At the start of the second half, the pendulum swung from this end to another as both sides were having a go at each other.

In the 48th minute, Given Mashikinya made a solo run from close the centre-line into United’s box, with SuperSport head coach Kaitano Tembo barking at his defence and midfield in frustration, as they allowed Masuku to venture all the way but fortunately for SuperSport, Mashinkinya’s shot was a tame one that could not bother Ronwen Williams.

The 83rd minute saw Victor Letsoalo robbed off an opportunity of what would have easily become the goal of the day in all the DStv Premiership games. He received a delightful cross from down the left and he had all the time to decide how to pounce on it. Letsoalo tried an over-head kick that was well-executed and had Williams beaten, but it was the upright that came to the rescue of the Bafana Bafana captain.

Earlier on, SuperSport were dealt with a blow around the hour mark when Luke Fleurs was shown a second yellow card and sent for an early shower. He made a challenge on Letsoalo and referee Victor Hlungwani was not happy as he blew his whistle to award the hosts a free-kick, but Fleurs, in frustration of Hlungwani’s decision, threw the ball up and that irked the man-in-the-middle and he showed him red.

Six minutes later, the United coach was also brought to book for supposedly failing to stay inside his technical area, and referee Hlungwani pointed out – before handing him a yellow – that he had made the same transgression twice.

Matsatsantsa A Pitori have now gone two games without a win as they lost against Kaizer Chiefs about two weeks ago.