Players to watch in the Tshwane derby

The last time Supersport United beat Mamelodi Sundowns at Loftus was back in April 2019, with a 2-0 scoreline. 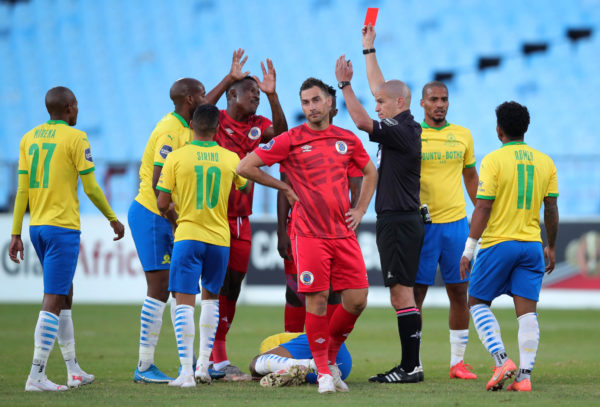 It must be a bitter pill to swallow for Kaitano Tembo knowing that his SuperSport United side usually come up second best in the Tshwane derby where Mamelodi Sundowns have had the upper-hand in the last 10 meetings in this rivalry that divides the capital city.

Masandawana host The Spartans this evening at the their Loftus Versfeld strong hold where Matsatsantsa A Pitori would have to track back to April of 2019 to find the last result they got at Loftus where they beat Downs 2-0, courtesy of goals from Ghampani Lungu and Grant Kekana, who has since made the switch to Sundowns.

The Brazilians are in the driving seat of the DStv Premiership and are outright favorites to get a positive result this evening, given that they have not conceded a single goal yet and United, on the other hand, are the more vulnerable side as they come at the back of a disappointing 2-1 defeat at the hands of rock-bottom Marumo Gallants.

Meanwhile, Downs could not get into gear against Cape Town City, who made sure that the defending champions left the Mother City with their tail in between their legs.

Here we look at the players to watch ahead of what promises to be a fierce contest in the capital city.

At this point, it is hard to imagine a Sundowns side without the Namibian striker, who leads the pack in the race for the Lesley Manyathela Golden Boot with eight goals. He banged in four goals in his last four games across all competition and not only does he rattle the net, he is always happy to lend a hand and assist his teammates to score.

Gone are the days where Gabuza mocked and called a defensive striker as the former Orlando Pirates striker would endure multiple and lengthy dry spells in front of goal. It is safe to say he is coming of age and he is one of the most important players in Tembo’s dressing room. Gabuza is Matsantsantsa A Pitori’s leading goalscorer this season with six league goals and he trails Peter Shalulile by just two goals.

Last season’s top marksman, Grobler has returned to full fitness and going up against a potent side like Sundowns, Tembo might go with an all-attacking front line with the combination of Gabuza and Grobler – which has proven to be quite lethal over the past season. If there is one player Tembo can bank on to show up in big games, it has to be the veteran striker who has made it a habit to net against big teams such as Kaizer Chiefs and Pirates.

IsiZulu commentator at SuperSport, Reggie Ndlovu describes Onyango as “umuntu ovala umnyango weSundowns”, loosely translated to the one who guards the door as Sundowns have not let goals in at all this season. While it has been a team effort from the goalkeepers at Masandawana, Onyango has been the main man in between the sticks, making sure that the side are without blemish. Dressed with the robes of one Africa’s finest goal-minders, Onayngo will look to remind everybody why he is highly rated across the continent.

“Mhlekazi”, as he is popularly known, has perhaps been one of the most consistent players in the Downs team, bossing and bullying everyone from the opposition, much to the delight of his coaches Manqoba Mngqithi and Rhulani Mokwena. Jali has been racking in the Man-of-the-Match gongs in recent games. If he is selected, the likes of Teboho Mokwena and Sipho Mbule can expect a tough confrontation in the heart of midfield.