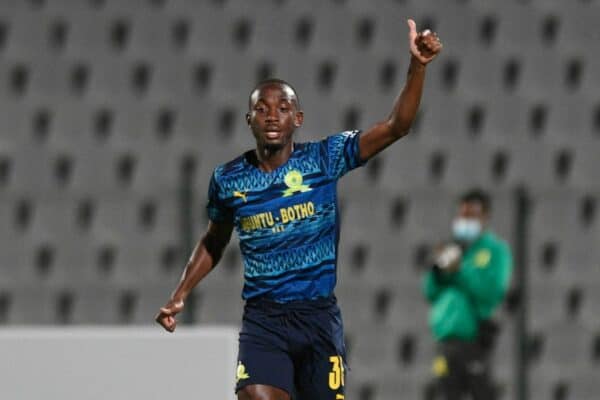 Swallows did try to fight back, with Ruzaigh Gamildien coming off the bench to give the Dube Birds some hope as he made the score 3-2 in the last minute of normal time. But the show belonged to Shalulile, who completed his hat-trick in stoppage time.

Maluleka also deserves praise as he made his second start in as many games, after impressing his coaches last time out in the Caf Champions League, and after this performance, the former Kaizer Chiefs midfielder is likely to make the team this weekend when Masandawana take on Summerfield Dynamos in the quarterfinal of the Nedbank Cup.

Shalulile’s first came in the 10th minute, when Maluleka played in a well-worked cross, finding Shalulile on the rise as the Namibian striker headed past Thela Ngobeni. For his 17th goal of the season, it was Maluleka again who was the provider, this time playing a long ball over the midfield and defensive line of The Dube Birds, finding Shalulile, who controlled the ball before beating Ngobeni again.

Before you could even blink, Swallows pulled one back through Dillon Solomons, who beat goalkeeper Reyaad Pieterse at his near post.

However, that comeback was short-lived as Downs restored their two-goal cushion in the 28th minute. Skipper Andile Jali played a delightful ball over the top, finding Bradley Ralani, who controlled the ball with his chest, cheekily beat his opponent to create some space for himself, and shot past Ngobeni.