And ‘misled’ the firm when questioned about relationship.

KPMG South Africa on Sunday admitted that senior partners Sipho Malaba and Dumi Tshuma had misled them with respect to their relationship with VBS Mutual Bank. The audit firm that is still reeling from accusations around its “false” Sars rogue report, and the nature of work done for the Guptas, admitted that loans made to Malaba and Tshuma by VBS Mutual Bank had not been disclosed, and that the two men had attempted to mislead KPMG on the nature of the relationship when questioned regarding it.

KPMG did not disclose the terms of the loans made to Malaba and Tshuma by VBS Mutual as it had not yet established this.

Malaba was the engagement partner of the firm with VBS Mutual Bank and, as such, was responsible for conducting and signing off the audit. Malaba gave the bank an unqualified opinion when he signed off the annual financial statements to end March last year, in July (see below). The South African Reserve Bank placed VBS into curatorship four weeks ago, and announced the launch of a forensic investigation into the affairs of the institution on Friday. 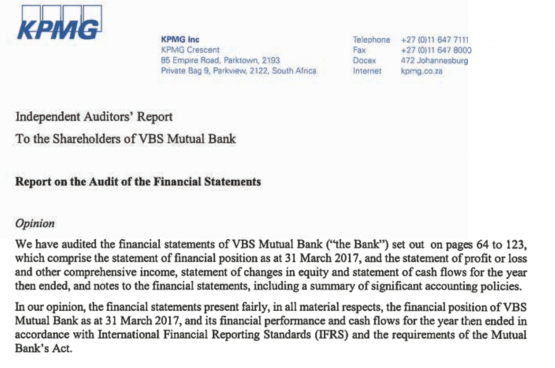 An investigation into the professional conduct of the two men was instituted by KPMG following a meeting with the curator of VBS Mutual Bank on March 27, this year.

Both men resigned with immediate effect on Friday when presented with the disciplinary charges. Despite their resignation, the investigation by KPMG will proceed. “This has been a very disappointing episode for KPMG. There can be no tolerance, however, of any conduct that compromises our reputation and we have moved decisively to deal with the situation,” said KPMG South Africa CEO, Nhlamulo Dlomu. She added that the firm would not hesitate to inform law enforcement authorities should the need arise during the course of the investigation.

Malaba was a member of KPMG’s executive committee, and was a senior partner for the work performed on a number of major audits of financial institutions that include Absa, Investec, Standard Bank and Nedbank. KPMG had not yet had the time to review the nature of his relationships with these institutions, but had been in touch with them to reassure them over the quality of those audits.

The focus will now turn to whether Malaba and Tshuma were given loans on “soft” terms, whether they had in fact begun paying the loans back, and whether the quality of the audit had been compromised as a result of accepting the loans.

KPMG is still reeling from accusations that it authored a report on a “rogue” unit of Sars for purely false and political purposes that gave President Zuma the basis with which to fire individuals he deemed as opposing his own nefarious aims. The firm was also embroiled in a scandal as the audit partner for the Guptas that saw money flowing from the Estina Dairy via Dubai and back into South Africa to fund the Gupta wedding in Sun City in 2013.

Dlomu admitted KPMG had lost clients amounting to “less than 10%” of its client book as well as losing a number of partners that resigned to move on to other firms in the wake of the revelations that came to light in September last year.

The firm will now undertake a review of hundreds of files going back as far as two years to reassure its clients of the quality of its audits.