Fortunately, this was the only surprise in the results. 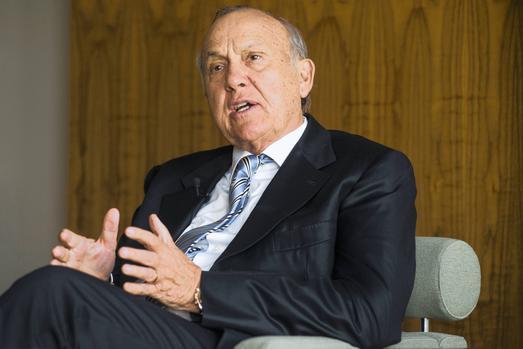 After some 50 years of shaping, moulding and influencing the strategic direction of retail giant Shoprite, Christo Wiese is to sell his voting rights, held as deferred shares, back to the company.

The shares form part of a two-tier capital structure long disliked by shareholders, where ordinary shares exist alongside deferred shares. However, the deferred shares, which carry 32.3% of the voting rights of Shoprite, are ringfenced and held by Thibault Square Financial Services, Wiese’s investment business.

“In the last two years we have engaged with investors on a one-on-one basis to address concerns like the compilation of the board, our remuneration policy and the capital structure,” says CEO Pieter Engelbrecht. “Changes to the capital structure are not for management to decide upon and must be voted on by shareholders, guided by the lead independent director Edward Kieswetter.”

The move to simplify the control structure has been cautiously welcomed by investors, but much hinges on the price to be paid. While Shoprite’s memorandum of incorporation lists the value of the shares at 0.1 cents per share, putting the value at just above R30 000, the reality is likely to be somewhat different.

“When the Shoprite/Steinhoff/Star deal was being negotiated the deferred shares were valued at R4 billion,” says Wilhelm Hertzog, portfolio manager at Rozendal Partners. (For further detail, refer to the Star pre-listing statement.) “This is a substantial number that could impact on the balance sheet.”

As the value of these shares is not directly related to the Shoprite share price, shareholders will want to understand how the price is calculated.

While this move came as a surprise to shareholders, it was, fortunately, the only surprise for shareholders who were bracing themselves for more bad news following the shocking trading update in January.

The numbers were torrid as warned, and Engelbrecht went to some length to explain how these arose. He accepted responsibility for Shoprite’s own goals and insisted that the results would not be repeated in the second half of the year. 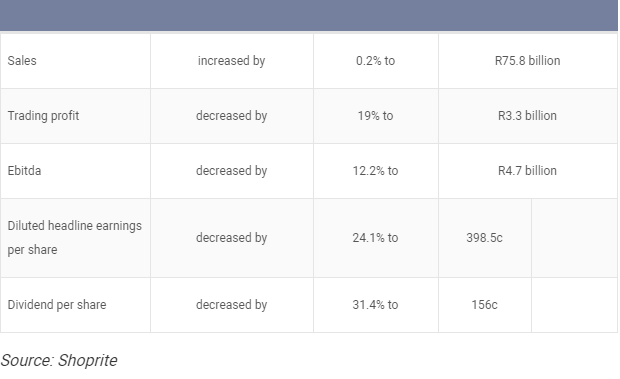 “Our first-half performance is below expectations, but not a reflection of the fundamental strength of the business,” Englebrecht says.

The retailer was impacted by currency devaluations in its core African markets of Angola, Nigeria and Zambia. Hyperinflation in Angola saw margins fall by 0.8%, causing a R552 million profit to turn into a R62 million loss.

The supply chain disruption caused by industrial action at the Centurion Distribution Centre last May and June lasted longer than anticipated. At the same time, more than half of the business went live on the new SAP IT system, compounding stock-out woes.

The result was that an estimated 2% of sales growth was lost, equivalent to R1 billion in turnover and R250 million in profit. These issues coincided with the longest period of stagnant inflation in a decade. “We have never had 18 months of consecutive deflation in the history of this business,” says Engelbrecht.

As a result of the above Shoprite lost some market share. What is noteworthy though, is that the retailer did not take the easy route and raise prices to stem the losses. “It is critical that Shoprite uses its scale and bargaining power to keep its prices lower,” says Hertzog.

“The only way to counter deflation is to grow volume,” adds Engelbrecht. “We take responsibility for the lack of performance. But this does not mean our business is not sound. It is still a very big and significant business and we have plans to get back on the growth path.”

Strategic decisions to invest in convenience foods, fresh foods, private label and liquor have paid off, and the positive sales trend emerging from the festive season has continued in January and February alongside improving product availability.

While Africa’s currency woes saw sales decline by 13.3% to R11.1 billion (14.7% of turnover) in the half, Engelbrecht remains bullish on Africa’s long term potential.

He noted that in Angola, which has become central to Shoprite’s Africa operation, the company has become a partner to government. “We have helped to create 10 agri projects, as well as a livestock project. For the first time, you will be able to buy fresh meat in Angola. The government is making structural changes that are healthy and indicative of long term view. It will introduce Vat, but not in this financial year, and the minimum wage will be increased by 30%, which is positive.”

“Africa is cyclical,” says Hertzog. “Its boom and bust cycles are not six months to a year, but three to five years. If you stay the course, as Shoprite is doing, you could do well, but it won’t be plain sailing.”

Africa’s population will grow to 4.7 billion people, adds Engelbrecht. “And people will need to be fed. I don’t see anyone better positioned to benefit from our existing investment. Yes, Africa is an emerging market, and yes, it’s risky, but that is a risk we accept for the future.”