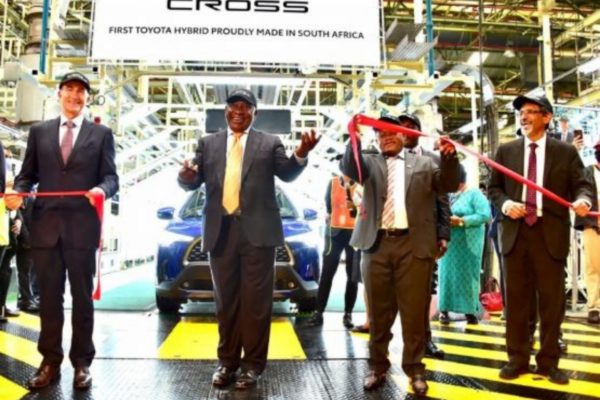 Toyota South Africa Motors (TSAM) is anticipating that the government will provide a support package to reduce the price of new energy vehicles (NEVs) to make them more accessible and drive volumes.

TSAM President and CEO Andrew Kirby confirmed on Tuesday he is confident the Automotive Green Paper published by the government “will translate into formal regulations and government support”.

“It is for this reason that we have set our pricing accordingly so that hybrid technology can become more accessible,” he said.

Speaking at a function at TSAM’s Prospecton Plant in Durban to celebrate the opening of the Corolla Cross production line in South Africa, Kirby said the cost of NEVs is simply not viable for many customers without the type of government support packages that are available in other countries to establish a strong demand.

Kirby said the Green Paper details concepts that will allow the automotive value chain to pivot towards NEVs.

Minister of Trade and Industry and Competition Ebrahim Patel said that based on the imperatives of climate change, his department is looking at the development of electric vehicles and the launch of the Corolla Cross production line “is a very important step in that direction”.

“We published the Green Paper for public comment and are taking it to Cabinet as soon as the different inputs have been collated and the funding modalities have been worked through,” he said.

When the Green Paper was published, the stated aim was for the strategy to be finalised within 90 days following its gazetting to allow the policy proposals to be submitted to Cabinet for consideration by October 2021.

It appears unlikely this target will be met.

Mabasa said the Department of Trade and Industry and Competition (dtic) has indicated that it has received quite a number of comments from different stakeholders and are going through each and every comment.

“We want to obviously give them an opportunity to finalise those comments because the last thing we want is for them not to consider everything.

“We are hoping that they will be able to come back to us with some very definitive timelines on what the next steps will be after they have gone through the comments. They have not yet announced the new timelines,” he said.

Kirby told Moneyweb after the formal event that a lot of work has been done on the cost modelling on the programme and he is aware the dtic is still getting more input.

“But I suspect it will be finalised in the next six months,” he said.

President Cyril Ramaphosa said it is fitting that the Corolla Cross hybrid vehicle is being launched a week before the COP26 Climate Change Conference.

He said the government has called on leaders of developed economies to support South Africa’s efforts to green the domestic economy and address the country’s very ambitious climate change goals through equally ambitious grant and concessional funding support.

“Government published a draft paper for public comment on a roadmap to the production of fully-electric vehicles, which will be taken further based on the discussions with international partners and the local industry.

“The launch of the Corolla Cross hybrid is an important step on our path to transforming the car-making business into a green industry success story. It will take hard work. But we must do it,” said Ramaphosa.

Kirby said Toyota has invested a total of R6.5 billion in its Prospecton plant over the last five years, with the Corolla Cross accounting for R2.6 billion of this investment.

He said the introduction of the Corolla Cross model has generated a total of 575 new jobs at the plant while more than 1 200 direct jobs were created in the component supply base.

The significant focus during the project was to maximise the local content for this model, which has resulted in the localisation of 621 parts with 56 local suppliers – 16 of which are black-owned – and has brought five new black-owned Tier-1 suppliers on board, he said.

“The economic contribution with TSAM’s local suppliers for this project is over R1.4 billion per annum.”

Kirby said more than any new model TSAM has ever brought to the market, the introduction of the lower emission Corolla Cross in hybrid guise is significant in that it is integral to Toyota South Africa’s roadmap towards carbon neutrality.

This is not just limited to reducing vehicle emissions but spans activities across the entire value chain, including its suppliers, manufacturing facilities, offices and parts warehouses.

Kirby said TSAM plans to significantly accelerate these activities and is targeting to increase its onsite photovoltaic solar capacity from the current five megawatts (MW) to 31MW, and plans to repurchase the remainder of its electricity needs only from renewable resources by 2028.

“We are therefore targeting to be 100% reliant on renewable energy by 2028,” said Kirby.

“As a pilot step towards carbon neutrality we are investigating ways to eliminate or offset the balance of our carbon emissions, especially those originating from the use of natural gas in our production processes.

“We are targeting to invest over R2 billion to realise these goals in the next seven years,” he said.

Kirby added that TSAM is committed to the adoption of NEVs in the South African market and also needs to keep pace with the green regulations in its export markets, such as the UK and the European Union.

The launch of South Africa’s first locally produced volume hybrid electric vehicle therefore not only gives local customers the opportunity to pursue their own change to green mobility but also “establishes the building blocks for our long term sustainability as a globally competitive and relevant exporter”.

Kirby added that to drive this change as fast as possible, TSAM itself has a very ambitious target of selling more hybrid Corolla Cross models than traditional internal combustion engine models by 2035.

He said only 224 NEVs were sold in South Africa in 2020 and only 322 to date this year. “We plan to fundamentally change the NEV landscape in South Africa from a few hundred NEVs a year to well over 10 000 …

Kirby said TSAM truly believes the best way to reduce carbon emissions as soon as possible is to offer a choice of diverse solutions to its customers so they can choose the best options for their diverse circumstances.

“Our roadmap to carbon neutrality promises to be an exciting journey and Toyota plans on playing a pivotal role as we transition towards green mobility in South Africa and on the continent.”

Which is better, Toyota Urban Cruiser or Suzuki Vitara Brezza?
6 days ago
6 days ago

Which is better, Toyota Urban Cruiser or Suzuki Vitara Brezza?
6 days ago
6 days ago