The service was attended by a couple of dozen people due to the Covid-19 regulations, with social distancing and wearing of masks observed. 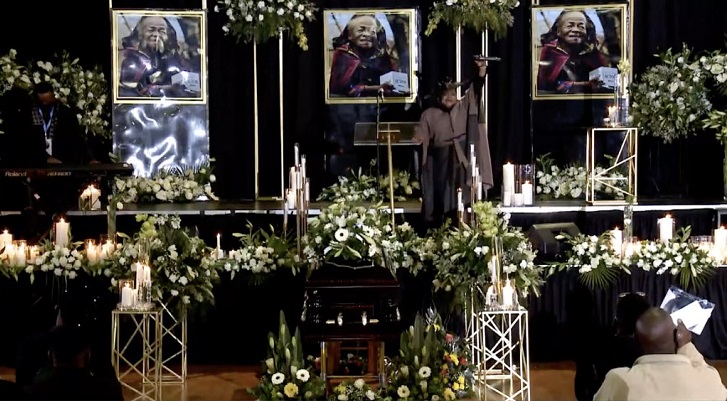 Veteran and iconic actress Mary Twala was laid to rest on Thursday in Soweto after passing aged 80 on Saturday.

The service was held at Grace Bible Church and was streamed live on several platforms.

Somizi’s husband Mohale Motaung was by his side at every moment during the service.

Somizi said: “Before she passed on she told the doctors that she wants a lot of flowers and she wants to be dressed in the same dress she wore at our wedding. For me it was a matter of pride, she smelt the flowers well she was still alive.

“I am not sad because my mother is gone but I am sad that my umbilical cord has been cut completely. I am so at peace with what my mother has achieved, she’s seen me walking down the aisle, she’s seen her granddaughters, she has seen her sisters, her family loved her and she loved them.”

Somizi thanked South Africa for loving his mother, saying she was also appreciated in the industry.

“Everyone in South Africa rest assured you have nothing to make up for, you have loved my mother. I would like to say to my mother, thank you for instilling everything that I am today. She was the most punctual person I know and I even know that her death was on time.”

He added that he had gained the most powerful and generous ancestor.

The service was attended by a couple of dozen people due to the Covid-19 regulations, with social distancing and wearing of masks observed.

Legendary gospel singer Rebecca Malope paid an emotional musical tribute as Twala’s coffin was opened for viewing for those in attendance. Somizi was so overcome with emotion at that point, that he could barely walk.

Family friend, TV presenter Andile Ncube, was the MC of the service, and reiterated that a giant had fallen and she will be remembered for her kindness and the legacy she leaves for all.

Zanele Twala, the younger sister of Mary Twala, said: “Let’s shift our thoughts on how much we will miss her; rather let’s remember the moments of the many funny, joking, laughing and happy times you shared with her.”

She thanked Somizi for being a supportive son and taking care of his mother until the end.

Twala’s agent, Wesley Hale, said their team was very protective of her time and space, and a team of six managed Mary’s career for over 30 years.

“She prescribed to four basic rules, respect, love, dedication, and loyalty. That was the foundation of her career. What we witnessed was the life of a performer, she had given her life for her craft and we can only hope that her life leads a call to our leaders that her work is not a sport or culture, but an art.”

The service was attended by media personality Bonang Matheba, and videos were also shown from fellow actors who paid tribute to Twala such as Kenneth Nkosi, who said she was an absolute professional and thanked her for all the work she has done for the industry.