Nomzamo Mbatha is making waves with her acting career, and the international recognition is will certainly take her further in her career 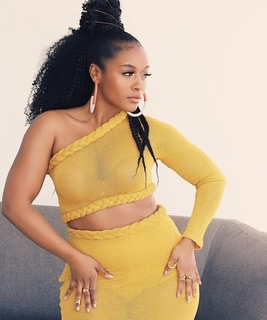 The former Isibaya actress has been successfully building her profile in the past few years, with roles as a United Nations Goodwill Ambassador, a brand ambassador for Puma Women, with her new Shandu Puma collection dropping sometime this month, and acting in movies and series in South Africa.

Mbatha is set to make an appearance on the ever-so anticipated film, Coming 2 America, which is stet to premier on Amazon on the 5th of March. Mbatha will be acting alongside A-list actors such as Eddie Murphy, John Amos, Wesley Snipes Leslie Jones, Garcelle Beauvais, and many more.

The American digital and print magazine, The Hollywood Reporter, founded in 1930 focuses on the Hollywood film, television, and entertainment industries, and they have found an interest in Mbatha’s rise as an actress, and have written a piece on the star and her big studio debut in the film Coming 2 America. The publication which has just over 1.6 million followers on Instagram highlighted Nomzamo’s background; where she comes from, how she entered the entertainment industry, and what Craig Brewer, director of Coming 2 America had to say about working with her and having her presence on set.

On the 28th of February, the American syndicated talk show The Real, presented by Adrienne Houghton, Loni Love, Jeannie Mai and Garcelle Beauvais, announced that Nomzamo would be one of the guests that they were going to have on the show, in a clip that they posted on Twitter to show the guests that would be making an appearance in the first week of March. They later posted another tweet on the 2nd of March, announcing that the star will be on the talk show on Wednesday, alongside co-star Jermaine Fowler who will also make an appearance in Coming 2 America.

Stars of the much-anticipated “Coming 2 America” sequel Jermaine Fowler and @NomzamoMbatha are here on Wednesday! pic.twitter.com/tnnDrXcNg8

The human rights activist was also featured On BBC News Africa. Nomzamo spoke to a BBC reporter about her debut in the film during an interview that was later posted on Youtube. In the interview she says that “when I found out I had the opportunity to audition for this role I was like ‘what, are you serious?’, there’s no way I’m going to get this, but when I read about the role itself I was like ‘I know I can definitely be able to give it the subtle African nuances that I know that I could be able to offer to the character'”.