Programme director confronts the crowd about how they failed top actor while he was alive even though some have gathered to pay their last respect. 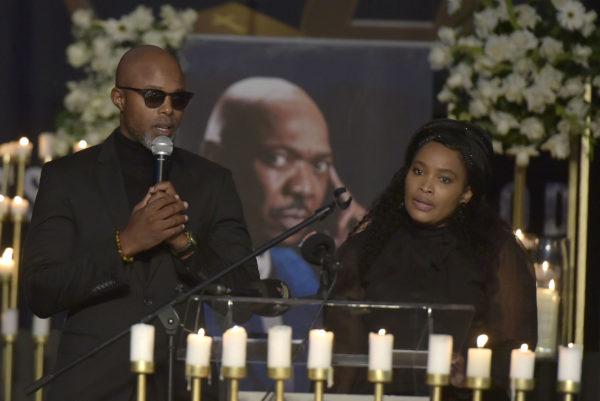 Thapelo Mokoena and Ayanda Borotho were the programme directors at the memorial service of the late Menzi Ngubane and highlighted just how much the industry didn't appreciate him when he was alive. Picture: Neil McCartney

Isibaya actress Ayanda Borotho, who acted alongside the late Menzi Ngubane on the soapie, confronted mourners on Thursday and told them that the industry didn’t appreciate the star while he was still alive. A clearly emotional Ayanda said she was not going to let the opportunity to address what she was feeling slide.

“When I heard of Menzi’s passing I was very angry,” she said. “I was angry because no legend or icon should die like Menzi. In the years that Menzi worked in this industry, he should have accumulated enough wealth.”

An emotional Ayanda added that she knew that if Menzi was around, he was going to question what some of the people were doing at his memorial.

“It is so unfortunate that we spend money, but only do so when the person is gone. There is nothing we can do now. He won’t come back to us,” said Ayanda, adding she feels guilty and wished she could have done more for the internationally acclaimed star.

“I spent the past couple of days thinking that I could have done more,” she paused, before adding that, “This industry failed him. We failed this man that we now call a legend and icon.”

The programme director at the memorial, alongside actor Thapelo Mokoena, implied that Menzi was lucky because he no longer had to experience a world that incites pain on him.

And the renowned actor did experience pain in a lifetime. Ayanda indicated that last year there was fake news circulating suggesting Menzi had passed away.

“I remember last year there was pandemonium onset following rumours that Menzi had passed on. I called his wife and she didn’t answer. But eventually, I got a call from the wife who assured us that Menzi was fine but in hospital,” said Ayanda.

“I was relieved but when I later saw him and I told him what had happened, he was angry that lies were being spread about him. He assured me he was going nowhere and I believed him…let us allow him to go and rest peacefully.”

Menzi passed away last Saturday from a stroke and a few days after his death, his father followed and passed away as well. Before suffering from a stroke, Menzi battled a kidney problem but was fortunate to overcome it when he received a donor. Menzi, who is survived by his wife Sikelelwa and two children, will be laid to rest on Saturday in his hometown of Ladysmith, KwaZulu-Natal.

'You are unforgettable!' Connie Ferguson pays tribute to Shaleen Surtie-Richards
4 months ago
4 months ago

'You are unforgettable!' Connie Ferguson pays tribute to Shaleen Surtie-Richards
4 months ago
4 months ago