Markle also cleared the air about the reports she made Duchess of Sussex Kate Middleton cry. 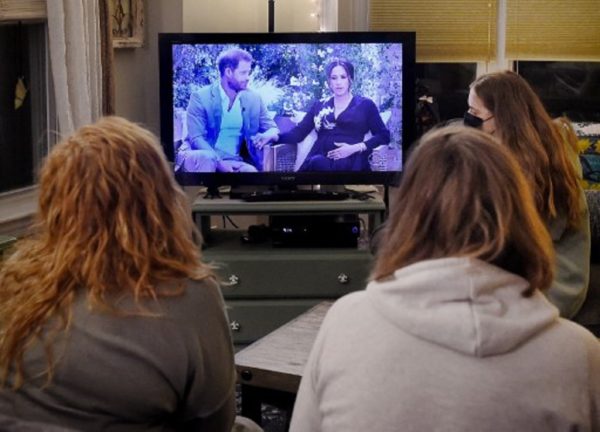 The two-hour interview with the US TV queen is the biggest royal tell-all since Harry's mother princess Diana detailed her crumbling marriage to Prince Charles in 1995. Picture: OLIVIER DOULIERY / AFP)

The TV event the world had been waiting for, the Oprah Winfrey interview with Prince Harry and Meghan Markle aired on CBS on Sunday evening in some parts of the world and people can’t stop talking about it.

The bombshell two-hour interview revealed a couple of shockers such as a member of the royal family shared “concerns” before his birth about how dark Archie’s skin would be.

Markle, who is biracial, said her husband revealed information about these conversations but she wouldn’t say who the royal family member was who said those words.

She said for this reason they didn’t make Archie a prince and the former actress adds her mental health suffered during that time.

After leaving the UK, the couple claim they weren’t protected by the royal family nor given a security detail and that Hollywood director and actor Tyler Perry offered them security when the royal family wouldn’t.

Markle also cleared the air about the reports she made Duchess of Sussex Kate Middleton cry.

In fact, the reverse happened, Meghan added, saying that Kate “was upset about something, but she owned it and she apologised”.

“A few days before the wedding, she was upset about something pertaining – yes, the issue was correct – about flower-girl dresses. It made me cry and it really hurt my feelings.”

With some intense revelations, the couple revealed the happy news they were expecting a baby girl.

Here are some of the best reactions to the interview:

i hope meghan and harry name their daughter diana so i can watch the monarchy collapse in real time #OprahMeghanHarry pic.twitter.com/ZSvmxmatKn

Harry’s reaction to announcing that they are expecting a girl ???? #OprahMeghanHarry pic.twitter.com/oRnfWq1gLJ

Prince Phillip pretending to be dead tommorow to take attention off the interview #OprahMeghanHarry pic.twitter.com/V00hc1cSRV

Tyler Perry protected the Queen’s grandson, wife and child when no one in England would. #OprahMeghanHarry

This interview is an absolutely disgraceful betrayal of the Queen and the Royal Family. I expect all this vile destructive self-serving nonsense from Meghan Markle – but for Harry to let her take down his family and the Monarchy like this is shameful. #OprahMeghanHarry pic.twitter.com/F2QDxELSsr