WATCH: Are these Zuma’s kids thanking SA for supporting their dad?

Considering how little is known about the younger ones in the family, the girls in this viral video could possibly be Zuma's kids. 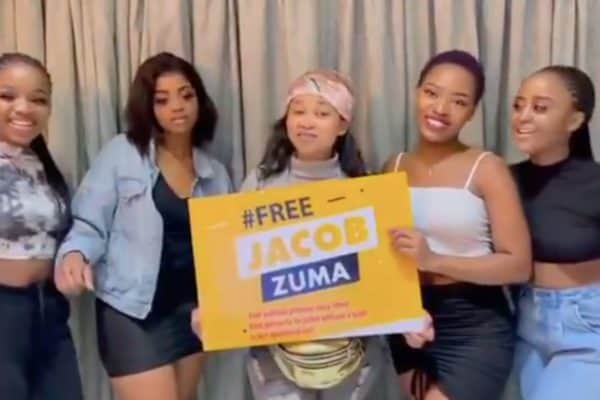 Zuma's kids: the girls pictured above recently posted a video referring to Jacob Zuma as their father | Picture: Twitter

A video of five young women thanking South Africa for supporting former president Jacob Zuma has social media users wondering if they are his children.

“South African people, thank you so much for standing up for our father Jacob Zuma,” says one of the girls in the video before the group closes off by saying “we love you so much/we love you Zuma” in unison.

In addition to questions about whether or not they could be Zuma’s kids, the girls in the video have been criticised for commenting about such a volatile political issue from the comfort and safety of their father’s home.

At last count, former president Jacob Zuma was said to have 23 confirmed children.

According to News24, not much is known about his younger children. He had three children (11, 12 and 13) with his estranged wife, MaNtuli, who was evicted from Nkandla in 2015 after being accused of trying to poison Zuma.

He reportedly has a son with his other wife, MaNgema (14).

He has a child with his other wife, MaMadiba (15), and she is looking after another set of twins (16, 17) of his that he had with an unnamed woman from Johannesburg as well as another child from a different Johannesburg woman (18).

He has two children with a Pietermaritzburg businesswoman named Priscilla Mhlongo (19, 20), a child with Irvin Khoza’s daughter Sonono (21) and another child (22) with another woman from Richard’s Bay.

His most recently confirmed child is a son (23) with Real Housewives of Johannesburg star, Nonkanyiso Conco. The baby was born on his birthday and is currently three years old.