On Monday morning, Tamaryn Green confirmed her marriage with a picture of herself and her husband, Ze. 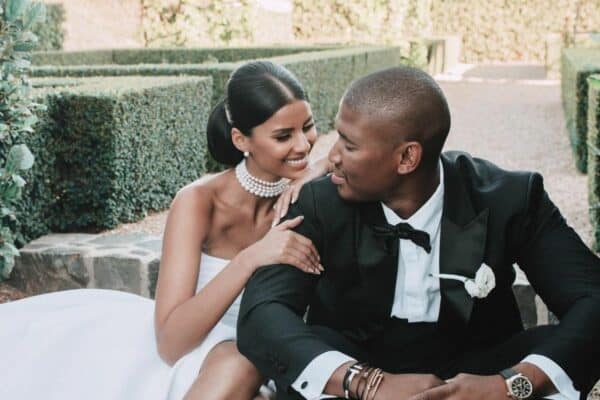 After completing all the necessary rites and rituals honouring her husband’s culture, former Miss South Africa, Tamaryn Green, and her beau Ze Nxumalo are officially married.

The pair invited their loved ones to Quoin Rock Wine Estate this past weekend to witness the last in a series of ceremonies to officiate their union.

Tamaryn Green and Ze Nxumalo first got engaged about a year ago.

Three months later, their families hosted a celebration to mark the occasion of the finalization of lobola negotiations.

Another three months later, the pair first wed in a traditional Zulu ceremony.

Last month, Tamaryn and her girls celebrated her impending nuptials with a bachelorette party and this past weekend, guests like Basetsana Kumalo and her husband Romeo, Tshepi Vundla and her partner JR Bogopa and Minne Dlamini all donned black evening gowns to bear witness to the union of Tamaryn and Ze.

Taking to Instagram on Monday morning, Tamaryn simply confirmed her union with a picture of herself and her husband seated on a set of steps at their wedding venue with the caption: “Here’s to the best day of my life. Husband and Wife.”

Kumalo shared a beautiful message in the comments under the photo.

“What a beautiful and blessed day it was, witnessing a coming together of two families and two souls united in love and by love. To say that it was a wedding to remember would be an understatement. Congratulations @tamaryngreen and @zenxumalo may your marriage be blessed always. Thank you for allowing us to be part of such a special day,” she wrote.

Nxumalo asked for Tamaryn’s hand in marriage on their vacation in the bushveld in April 2021. He got on one knee as they stood on a small hill overlooking a gorgeous sunset.

Who is Ze Nxumalo?

Zesimdumise “Ze” Ndwandwe Nxumalo was born in northern Johannesburg and spent most of his time in Durban, KwaZulu-Natal.

The businessman grew up going to private schools, took up swimming during his school days, went on to represent the country and received provincial colours for water polo.

According to City Press, Nxumalo was encouraged by his friend, Chad Le Clos, to return to swimming after he had stopped in matric to focus on his academic studies.

“I used to swim with him. We swam for the same swimming club and he convinced me to come back,” said the young athlete in the interview.

He studied at the University of Witswatersrand where he obtained a bachelor of law degree after matriculating from Kearsney College in 2010.

Known as a serial entrepreneur, Nxumalo has made great strides in his career.

In 2014 he began his entrepreneurial journey when Uber first launched in South Africa by borrowing money from his father to invest in Uber. His first Uber investment became a success, resulting in the entrepreneur owning a fleet of Uber cars.

He is the founder of ZIG Holdings, a youth investment holding company that was founded in 2015. ZIG Holdings soon became the enterprise development partner to EOH, a Johannesburg Stock Exchange listed entity, where he advised and consulted for the whole group.

The young entrepreneur is the executive director and youth empowerment partner of Richmark Holdings.

READ NEXT: Was the design for Tamaryn Green’s umembeso dress stolen?