PICS: Romance in the Maldives as Janez and his wife renew their vows

Former model turned television presenter, Janez Vermeiren, and his wife shared a special vow renewal in the Maldives, with their children as witnesses. 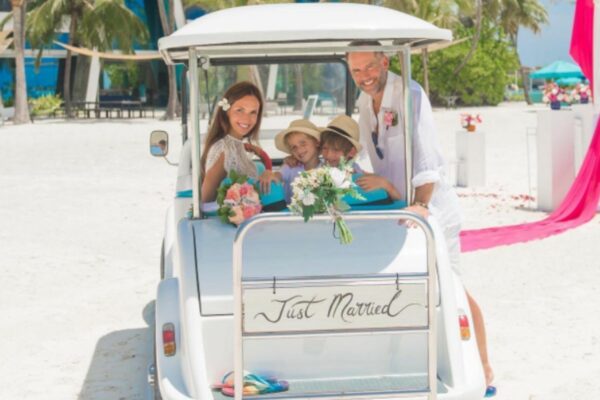 Janez Vermeiren and his Brazilian wife, Juliana Vasconcelos, had their vows renewed during a recent trip to the Maldives.

Travelling with Priority Escapes, they stayed at Kandima Maldives, a luxurious resort with 264 studios and villas boasting spectacular beach and sea views. They renewed their vows on the beach with their two sons forming an integral part of the ceremony. It was clearly a moment of celebration, complete with red rose petals, a beautiful cake and bubbly on the beach.

With glistening blue waters, white sand and palm trees in the background, the couple repeated their I-dos. “A little vow renewal at beautiful Kandima Maldives,” Janez wrote in an Instagram post. “Love you Bila.”

Janez and their boys all wore off-white shorts, flip-flops and white shirts for the occasion, while Juliana wore the same dress for their vow renewals that she wore on their wedding day.

Janez and Juliana got married in January 2016 during a romantic, private ceremony at Janez’s parents’ home in Cape Town. They had had a change of heart after they announced the postponement of their wedding due to Juliana being pregnant with their second son. They decided to get married after all and invited only their nearest and dearest to share in the celebration.

After their recent vow renewals, Juliana also shared a couple of pictures of the momentous occasion on her Instagram feed, saying: “When in the Maldives, why not renew our vows?”

Janez Vermeiren is currently the chief mover and shaker at the award-winning film and content sourcing company, FILMR.tv. Juliana is a Brazilian model and owns her own swimwear and sportswear company, Olá.