TV personality Tebogo Thekisho, popularly known as Proverb confirmed on social media after various media reports that his wife Onalerona Thekisho has been having an affair. According to the Sunday Sun, Proverb’s wife Onalerona Thekisho cheated on him with a Johannesburg businessman called Edwin Sodi. Sodi reportedly first hooked up with Onalerona at a car wash at Ruimsig, west of Johannesburg in 2013.

Sodi, the founder of the Blackhead Group, is said to live with his baby mama Nthateng Lerata , a former Capricorn FM and Radio 2000 presenter. Concerned fans poured out their hearts supporting Proverb.

In reply to his fans, the rapper said the reports were true but he would like to shield his children.

The tweets have since been removed. But the internet never forgets. 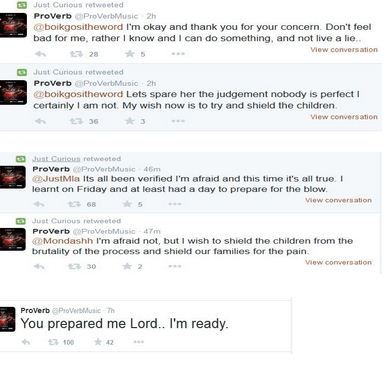 Screen grabs of the tweets that Proverb sent out.

You prepared me Lord.. I'm ready.

Better safe than sorry. No need to prolong the inevitable but rather take charge of the outcome #proverb

Why are peeps so insensitive towards #Proverb? It's a tough thing dealing with your partner of 10 years cheating on you, in the public eye.

Sunday is nt a good day to air your dirty laundry.what with tweeps armed with babalas and data!unless ofcos u wanna be talked about #Proverb