Wellspring and Lake Kinneret should give their backers a run for their money. 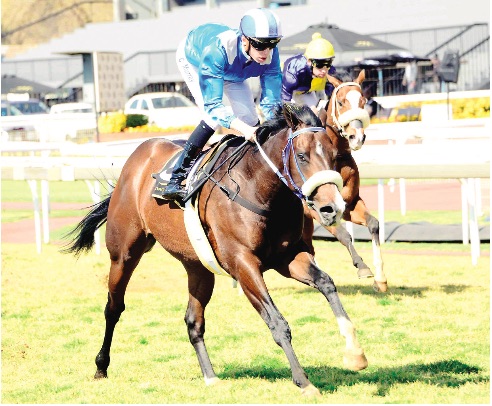 BANKER. Alwahsh, pictured winning his debut at the expense of The Puma, should follow up when he runs in Race 3 at the Vaal tomorrow.

Just 71 horses are scheduled to arrive at the eight-race Vaal meeting tomorrow and the truism of “the smaller the field, the bigger the upset” are words that will be ringing in many a punter’s head as he studies form.

There are a few potential longer-priced winners but my instincts (which are often correct) are leaning towards the form working out in most instances.

There are two possible Pick 6 bankers in the form of Alwahsh in Leg 1 and Wellspring in Leg 2.

Race 3, a MR 84 Handicap over 1200m, has a bit of depth to it, but only Alwahsh finished in the mon- ey last time out with the rest finishing further back than fourth.

Mike de Kock’s three-year-old charge is taking a steep rise in class from winning a Maiden Plate on his first official visit to a race- course but the betting indicates he probably did be er than expected that day. Ridden by Callan Murray, who will be in the saddle again, New Zealand-bred import

Alwahsh drifted from an opening call of 19-10 to 32-10 but still showed good pace and won well by three lengths from well-backed favourite The Puma. Wellspring was a 4.50-length fourth.

Alwahsh pulled up blowing, but will know much more about his job now and any problem he might have had will have been sorted out in the last three weeks. He should follow up.

Golden Man was not ridden out to the line by Ryan Munger last time out, so the run can be ignored. He had placed twice running coming into that race, including a 1.90-length second to Roquebrune over this distance on the Inside track in his third-last start, form that has worked out well.

That third placing was Wellspring’s second in a row a er the Clinton Binda-trained gelding went down to Lauren Of Rochelle and Sweet Trial over this course and distance last month. Fourth placed Lake Kinneret came out subsequently and won.

Jockey Piere Strydom takes the ride this time and Wellspring could finally get score on the board on his 11th a empt.

Callan Murray takes the ride on Binda’s other runner in the race, Countess Varovski and this Var filly could give the stable a 1-2 in the race. She ran a 4.50-length fourth behind Prosperity at Turfontein last Saturday, showing she is finally getting the hang of it.

Singaswewin (fifth at Turffontein last Saturday), Toby Coates and Bling Ball must be considered for Trifectas and Quartets.

Lake Kinneret looks a good Eachway hope in Race 6 over 1400m. St John Gray’s charge won on his second a empt and steps up in class, was impressive that day and has the services of nation- al jockeys’ log-leader Craig Zackey again.

Best of the rest could be Sleepinseattle and Var’s Your Daddy. Sleepinseattle only just failed when beaten a short head by William Grace over 1400m on the Vaal inside track last time. Third- placed Tokyo Drift won next time, which indicates the form could be honest. Lake Kinneret’s stable- mate Var’s Your Daddy followed his second career win in June with a one-paced sixth behind Streetwear but is be er than that. Zackey, it seems, is probably on the stable elect because he rode Var’s Your Daddy last time out.