Admire this Pin Up at Vaal

The field has strength in depth and Pin Up Fold should start at fair Eachway odds. 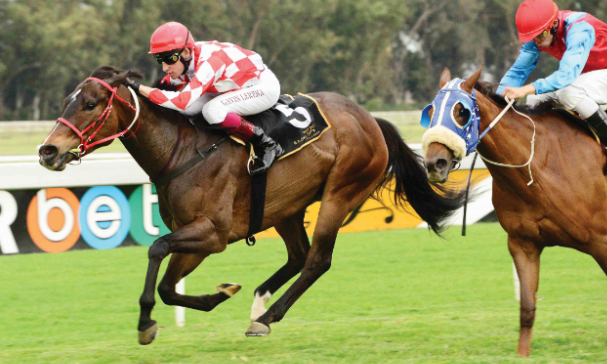 DOUBLE. Celtic Lady, pictured beating Burgundy Rose over 1000m at the Vaal last time, could defy a penalty when she meets that same horse in Race 9 at the Vaal Classic meeting tomorrow. PHOTO: JC Photos.

Those looking for a small pot to spoil their loved ones on Christmas Day could do worse than backing Pin Up Fold in Race 4 at the Vaal Classic meeting tomorrow.

The field has strength in depth and Pin Up Fold should start at fair Eachway odds.

Lucky Houdalakis’ charge has run only once and that effort last month was most promising. She was backed at long odds and, well there throughout, kept on stoutly to finish a 4.75-length third behind Irish over the straight 1400m. Sixth-placed Insignis franked the form by winning next time, while fifth-placed Pinfanta only just failed subsequently.

Pin Up Fold will benefit from that experience and, although she is running round a turn for the first time, she could pay to follow.

Pale Lilac also comes in off a promising debut run. Drawn well in a race over this course and distance last month, she was all at sea in the early stages, but took off when the penny finally dropped and finished a one-length second to Zargun. Tricia, Amazing Trip, All Abuzz and Kick Butt were well beaten that day and should not turn the tables on Alec Laird’s runner. She looks the right one for Exactas.

Sweaty Betty is from the in-form yard of Mike de Kock and will have her supporters. She has run twice and showed good improvement second time out to finish a 2.50-length second to Penny Royal over 1200m with Our Shining Star fifth. Third-placed Annie The Great finished third again next time. Sweaty Betty tries further now and is not guaranteed to stay on her breeding.

Shakespeare Inlove has finished in the minor placings in her last four of five career starts and got her head in front for the first time when staying on for third, 0.85 lengths behind Zulu Dawn over the straight 1400m last time out. Johan Janse van Vuuren’s runner will be fully fit in her third run after a layoff. She is not well drawn and could have to settle for minor money again.

The strongest bet of the day could be Celtic Lady in Race 9 over 1000m, though she is likely to start at fairly cramped odds.

This Roy Magner-trained mare was finally rewarded for her consistency with a 0.50-length win over Burgundy Rose over 1000m down the straight last month and the form has been franked.

Burgundy Rose is 1kg better off and that is enough to reverse the form, but that win would have given Celtic Lady a nice confidence boost and she could defy the penalty.