Cape Town Met teenage hero Luke Ferraris has a good chance to keep his name in lights when he partners hot-shot Malmoos in the Grade 2 World Sports Betting Gauteng Guineas at Turffontein on Saturday.

The 19-year-old Luke Ferraris showed off his burgeoning talents at Kenilworth last weekend, as he steered Rainbow Bridge to victory in Western Cape’s biggest race.

He managed to switch off the notoriously excitable champion soon after the start, kept remarkably cool as the gelding dawdled at the back of the field, and then executed the well-laid plan of an outside-rail run to claim the honours.

The Met meeting hosted a stellar cast and was a notable triumph against the odds of a lockdown-empty racecourse, so this weekend’s action might seem, at first glance, to be a bit of a drop in pace, so to speak.

However, both the Guineas and the Fillies Guineas – races for promising three year olds – have the potential to be thrillers and, most importantly, are early showcases for a new generation of equine stars.

Indeed, the Guineas looks a fiercely competitive affair, with all four at the top of the card presenting a good case and at least two others looking dangers.

Two of the leading four are saddled by the master Mike de Kock: aforementioned Malmoos and Mount Pleasant.

With stable jockey Callan Murray booked for the latter, it might look like he is the yard elect. But Ferraris has ridden Malmoos in all five of his starts to date, with four straight wins and a single disappointment in the Cape Guineas, when the Captain Al colt didn’t have the smoothest run and was said to be off his best.

Malmoos is drawn on the paint and couldn’t ask for much more in the way of confidence in the saddle.

When Mount Pleasant made his debut after the coronavirus shut-down he lifted the racing world’s spirits with three super victories and was being talked of as De Kock’s next best thing. Well, he might still be.

Starting as odds-on favourite for the Dingaans at Turffontein at the end of November, in his first attempt at 1600m, the Australian import ran out of puff in the final stretch and some questions might be raised about his stamina credentials for this course-and-distance repeat.

But it is two months down the line – quite a long time in the life of a young horse – and the De Kock operation wouldn’t be sending him out here if they didn’t believe he could crack it.

Dingaans victor Catch Twentytwo, from the Paul Peter stable, has every chance of repeating that effort, especially after confirming his fitness and form with a cracking 1400m feature win in early January.

The fourth horse in calculations is Johan Janse van Vuuren-trained Second Base, who thrust himself into Guineas contention with a commanding win in the Grade 3 Sea Cottage Stakes two weeks ago – his fifth win in six starts.

Other runners with outside chances of upsetting the odds – and might be considered for bigger betting permutations – are Copper Mountain and Eliud.

There’ll be a few more yells of encouragement than there were at Kenilworth, with owners and their friends having been allowed back onto the racecourse following the latest easing of Covid restrictions. Sheikh Hamdan bin Rashid al Maktoum of Dubai won’t be there, but Malmoos and Ferraris could make him wish he had been.

Ordinary members of the racing public are stilled banned, but will follow the action closely – thanks to both the quality of the racing and the prospect of big money. The Pick 6 Megapool is predicted to hit R5 million.

Of course, the Guineas races are the alternate first legs of the Triple Crown and Triple Tiara, following the Cape Guineas and Fillies Guineas and will provide important clues as to who will risde to prominence in the classics to follow.

The oddsmakers have the Wilgerbosdrift Fillies Guineas at 12-1 bar two, suggesting yet another ding-dong battle between keen rivals Anything Goes and War Of Athena. So far, the former is 2-1 up in their head-to-head, but the latter was the victor in the most recent clash. The challenge for punters is finding what will follow them home and make up Trifectas and Quartets. 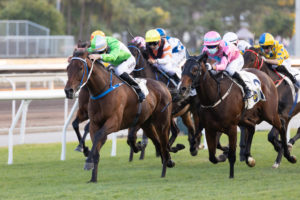