Daily hacks: How using colourful make-up can boost your mood

Colour could precisely give us a much-needed lift in morale, by boosting the production of dopamine, one of the feel-good hormones. 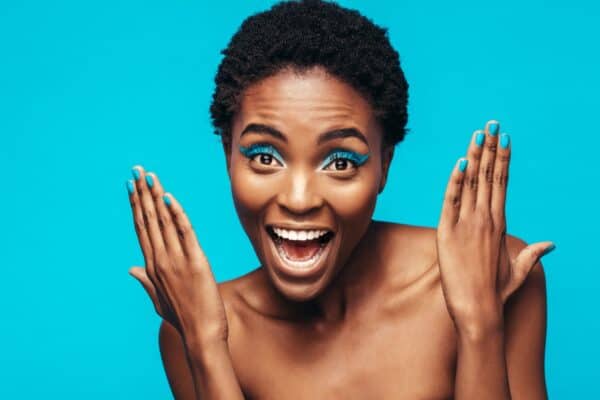 From the pandemic, to the war in Ukraine and the economic crisis, these are hardly the happiest of times.

And, this has inevitably impacting the well-being and mental health of pretty much everyone.

So, what better reason to work on boosting your daily production of dopamine, the pleasure hormone – through food, exercise and meditation, and also make-up.

What if blush was the answer to all your problems? It’s probably a bit of an exaggeration, but make-up could still have a positive effect on your mood.

While there are many good things about the profusion of natural and authentic beauty, it does lack a little bit of fun.

As such, colour could precisely give us a much-needed lift in morale, by boosting the production of dopamine, one of the feel-good hormones.

And if feeling better is just a few brushstrokes away, then surely it’s worth a shot, right?

Researchers at France’s National Center for Scientific Research (CNRS) have described dopamine as a chemical substance used as a neurotransmitter that produces a state of satisfaction.

While a lack of dopamine can lead to a drop in motivation, mood swings or significant fatigue, it is possible to naturally boost its production through certain foods rich in tyrosine, such as avocado, banana, and of course chocolate, as well as through exercise, exposure to sunlight, or enjoying certain activities like listening to music or simply stroking an animal.

But, chromatherapy – or colour therapy, could also promote happiness, hence the rise of ‘dopamine beauty’, also known as ‘dopamine makeup’, which has taken over social networks in recent weeks.

Just type the hashtags #dopaminebeauty and #dopaminemakeup into TikTok, and you’ll soon see a joyous riot of colours.

Rainbow or two-tone eyeshadows, in bold, vibrant shades, multicoloured eyeliner, and glitter galore, all seem to have invaded the social network, and for good cause.

The idea is to indulge all imaginable fantasies – within reason – with vivid, zesty colours, temporary tattoos, stickers and more. In short, it’s about having fun. And, what better time than summer to show off your creativity, imagination and eccentricity?

And for the less daring, this can simply be a matter of stepping up your make-up doses, whether it’s blush, lipstick or lip gloss, or showing some flights of fancy in small touches.

You don’t have to go as far as fluorescent eyeshadow, but you can try adding a line of coloured eyeliner, a mouthwatering lip colour, or even flashy nail polish to draw attention to your hands.

On the Chinese social network, there’s even a ‘dopamine nails’ hashtag. All of which is surely enough to give your morale a boost in time for fall.