Tiguan Allspace has been confirmed for South Africa from 1 July. 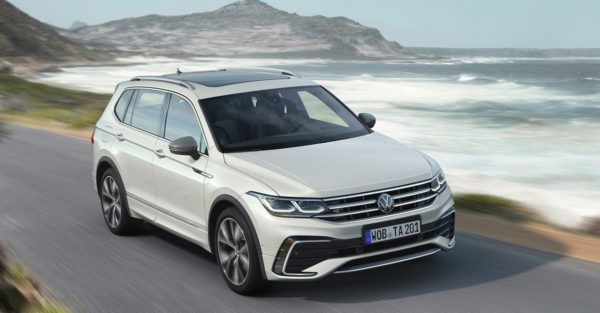 Aside for an extra 22 mm, the Allspace remains otherwise unchanged from the standard Tiguan.

Volkswagen has taken the wraps off of the third derivative of the refreshed Tiguan range in the form of the facelift Tiguan Allspace.

While appearing fundamentally unchanged from the standard length model revealed along with the performance R last year, the Allspace’s main difference is of course and extended overall length to 4 723 mm, a gain of 22 mm, plus a third row to accommodate the seven-seats. Allspace will once again provide seating for seven.

Despite the increase in length, boot space remains unchanged with 700-litres available with all seven seats up and up to 1 755-litres with the second and third rows down.

Like the standard Tiguan, the Allspace comes as standard with an eight-inch touchscreen infotainment system incorporating wireless Apple CarPlay and Android Auto, the 10.25-inch Active Info Display instrument cluster, an optional 480-watt Harman Kardon sound system and on the safety side, the semi-autonomous Travel Assist that works in conjunction with the Adaptive Cruise Control.

In a move similar to the refreshed Polo and unlike the Tiguan, the Allspace will, for now, not have the option of mild-hybrid assistance as all of the powerunits will be conventional TSI and TDI units.

On the TSI side, the 1.5 TSI Evo continues as the base engine with outputs of 110kW/250Nm followed by two versions of the venerable 2.0 TSI; the entry-level producing 140kW/320Nm and the flagship rated at 180kW/370Nm. A six-speed manual comes as standard on the front-wheel-drive only 1.5 with both 2.0-litre units receiving a seven-speed DSG as well as the 4Motion all-wheel-drive system. No plans are in place to offer the Allspace in R guise. Interior is carried over from the facelift, standard length Tiguan.

In terms of diesel motivation, the familiar 2.0 TDI is again the sole option albeit in two states of tune; 110kW/340Nm and 147kW/400Nm. While equipped with the aforementioned DSG ‘box as standard, only the latter comes with the 4Motion system as the former sends its grunt to the front wheels.

Going on sale in Europe within the next few weeks, Volkswagen South Africa has confirmed availability of the Tiguan Allspace from the first of July with pricing and spec to be announced in due course.