Arrival of the N marks the first time a performance Elantra has ever been offered. 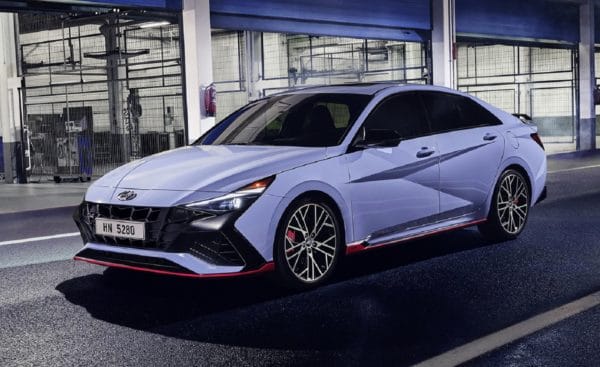 Already striking, the N touches have made the Elantra more aggressive looking than ever.

Hyundai has added a fifth N performance model to its global product line-up in the shape of the new Elantra N.

Joining the i20 N, the updated i30 N, Veloster N and the Kona N, the unveiling of the first ever hot Elantra, which confusingly carries the i30 Sedan moniker in certain markets, comes on the back of the reveal of the step-down N Line model last year with the newcomer also debuting a number of first time features not offered any model till now.

Essentially an integration of the driveshaft, wheel hub and wheel bearing, the layout, according to Hyundai, reduces weight by 1.7 kg and results in a “lighter and stronger car” with an additional benefit being the ability to better withstand high lateral g-force levels.

Inside, Hyundai has revised the infotainment system and instrument cluster to include specific graphics and readouts such as boost pressure, oil and coolant levels as well as a lap timer and optional N bucket sport front seats with a reduced, by 50 mm, rear back and illuminated N logos on the headrest.

Underneath the bonnet, the Elantra N is motivated by the same 2.0-litre turbocharged engine as the i30 N and Kona N that punches out 206kW/392Nm. Paired to an eight-speed dual-clutch gearbox with a six-speed manual being offered as well, the Elantra N will get from 0-100 km/h in a claimed 5.3 seconds and top out at 250 km/h.

As with its mentioned siblings, opting for the dual-clutch ‘box sees the inclusion of not only launch control but also three modes; N Grin Shift, N Power Shift and N Track Sense with the former doubling up as an overboost function that unlocks an additional seven kilowatts for 20 seconds.

Going on sale towards the end of this year, the Elantra N, like the regular model, has not been earmarked for South Africa as it will most likely clash with the Kona N local buyers will be privy to from early next year.