The updates include a new split headlight design. Inspired by the City K-ZE concept that bowed in Shanghai earlier this year, the updates include a new split headlight design similar to the Citroën C3, a redesigned grille, grey 14-inch Volcano alloy wheels on upscale models, new taillights and in the case of the off-inspired Climber, faux satin silver front and rear skidplates, black cladding and roof rails with orange inserts that has been carried over the the mirrors as well. A total of of six colours will be available; Ice Cool White, Moonlight Silver, Outback Bronze, Electric Blue, Fiery Red and Zanskar Blue. 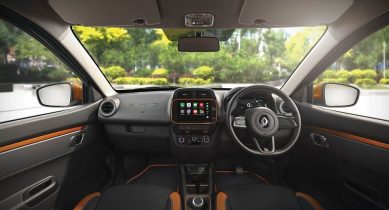 Just as big a change is the interior that now receives an eight-inch MediaNav Evolution touchscreen infotainment system with Apple CarPlay and Android, which also serves as a display for the new reverse camera. In addition, the interior materials have been upgraded and the choice of upholstery expanded to include either orange or white fabric or ‘crossway’ fabric with red striping. An LED digital instrument cluster rounds the changes off.

In India, the Kwid will be offered in a choice of five trim levels with notable spec on the base standard consisting of a driver’s airbag, 14-inch steel wheels, daytime running LEDs, rear parking sensors and ABS with EBD. Building on this, the RXE adds air-conditioning and a two-speaker sound system prep, while the RXL bring a double DIN audio, body coloured bumpers and mirrors, front electric windows and power steering.

The various interior and exterior upgrades have however not included the drivetrain where the Kwid can be had with either a 0.8-litre engine that makes 40kW/72Nm or a 1.0-litre outputting 50kW/91Nm. While a five-speed manual gearbox is standard across the range, a five-speed Easy-R automated manual (AMT) is optional on the RXT and Climber.

At present, it remain to be seen when the revised Kwid will be offered on local shores, but chances are that it might arrive towards the end of the year or in early 2020 with spec level likely to mirror that of the Indian model.