Citroën takes out the scalpels on C3

Inside, the changes are equally minor but still noticeable with the most prominent being a new wood-like veneer dubbed Techwood. Its debut having taken place at the Paris Motor Show four years ago, Citroën has officially revealed the facelift C3 that is anticipated to arrive in South Africa later this year.

Externally, the updates include new LED headlights, a restyled chrome chevron logo bar said to have been inspired by the CXperience concept, wider wheel arches on some model to accommodate the equally new up to 17-inch alloy wheels, new fog light surround colours, redesigned Airbumps with a new colour graphic and revised rear quarter panels.

As per its target market, the C3, in Europe, will offer an expanded selection of customised exterior detailing that includes the roof, mirror caps, actual body colour and the mentioned fog light surrounds and Airbumps. According to Citroën, a total of 97 as opposed to the previous 36 combinations can be specified with this consisting of seven body colours, three roof hues and four so-called colour packs that are coordinated with the roof. Inside, the changes are equally minor but still noticeable with the most prominent being a new wood-like veneer dubbed Techwood that consists out of a faux lightwood finish on the dashboard and on the seats, with the latter also receiving unique topstitching as well as a light trim on the upper half of the seat back and headrest.

The seats themselves meanwhile are also new and are in effect the same Advanced Comfort chairs as those of the C4 Cactus and C5 Aircross, with a driver’s side armrest being the only other new addition to the interior. 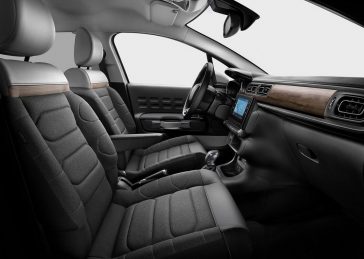 Up front, the C3 has remained as is with a choice of two engines; the familiar 1.2 PureTech three-cylinder turbocharged petrol that produces 61 kW or 81 kW and the 1.5 BlueHDI turbodiesel that develops 74 kW. Standard on the former petrol and oil-burner is a five-speed manual gearbox, with a six-speed manual or optional six-speed automatic available on the top-spec petrol.

As indicated, the updated C3 is due to arrive on local shores later this year, but with exact details still to be confirmed.