Fiat-Chrysler Automobiles (FCA) has revealed the latest iteration of the stalwart Dodge Durango in the United States, including a fire-breathing Hellcat derivative which now claims the title of world’s most powerful SUV. 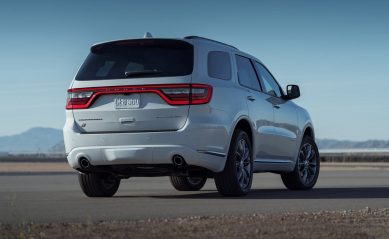 Officially one of the oldest models on sale in the States in that it has been around, notwithstanding a series of facelifts, in its current third generation guise since 2010, the seven-seat Durango also serves as Dodge’s only SUV and apart from the Hellcat, has once again received exterior and interior updates in what is likely to be its last major overhaul. Reserved for the SRT and Hellcat is a new front splitter, a textured low gloss black grille, extended wheel arches, different bumpers and wider door sills, a tailgate integrated spoiler and exclusive use of Pirelli’s Scorpion Zero all-weather rubber. A functioning bonnet scoop, dual exhaust outlets and a bespoke textured low gloss black grille rounds the fixtures to the Hellcat off. In addition, both it, the GT and SRT can be specified with dual racing stripes in five colours; Sterling Silver Metallic, Gunmetal Low Gloss Metallic, Flame Red, Bright Blue and Black with red outer lines. Inside, the Durango comes as standard with FCA’s 8.4-inch UConnect touchscreen infotainment system with Apple CarPlay and Android Auto, which can be upgraded to the bigger 10.1-inch display that incorporates the latest UConnect 5 software. A revised centre console, flat-bottom steering wheel on the GT and up, stitching on the now digital instrument cluster, chrome switches for the climate control and heated seats, a wireless smartphone charger plus a redesigned gear lever completes the transformation. On the SRT and Hellcat, forged carbon fibre inlays feature, while the Hellcat receives ventilated Nappa leather seats as standard with the Hellcat logo being embroidered into the headrests. Alternatively, this can be swapped for a black/red Laguna leather option still with the Hellcat insignia.

Underneath its unwrinkled skin, several updates have been made, mainly focusing on the R/T and the Hellcat. In the case of the former, these include an SRT exhaust, an electronic limited slip differential, black or optional red Brembo brakes with a six-piston caliper setup at the front and four at the rear, and four driving modes; Snow, Tow, Sport and Track. A selective active damping suspension is also offered. Unexpectedly, the Hellcat takes centre stage with bespoke differences to those already made consisting of a new oil cooler duct, a unique rear spoiler claimed to generate 63 kg of downforce in cooperation with the front-end at 290 km/h, stiffer dampers and springs, rebound shock absorbers, recalibrated electric power steering, ventilated Brembo brakes whose six-piston front calipers and four at the rear are complimented by discs measuring 400 mm and 350 mm, and seven modes for the transmission; Eco, Valet, Auto, Snow, Sport and Track. 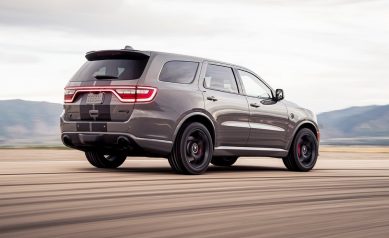 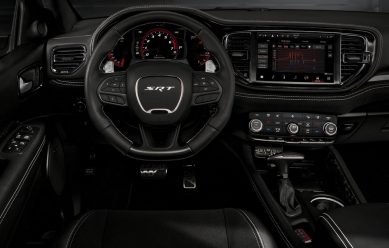 The Hellcat meanwhile also opts for the latter engine, but adds a 2.38-litre supercharger as well as a raft of internal updates relating to the actual block, cylinders, pistons, connecting rods and exhaust valves to deliver 529kW/874Nm. Seven kilowatts up on that of the Jeep Grand Cherokee Trackhawk and with a gearbox revised for quicker shifts, the Hellcat will get from 0-100 km/h in a claimed 3.5 seconds and top out at 290 km/h. 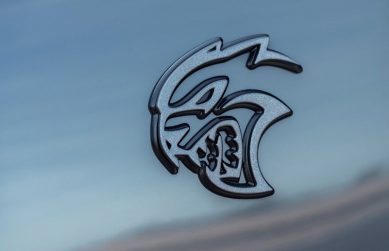 Available for ordering now with a an 11 colour palette; Vice White, Billet Silver, Destroyer Grey, DB Black, Reactor Blue, Octane Red, F8 Green, In-Violet, White Knuckle, Redline and Granite, pricing for the Durango is projected to start at $32 000 (R542 054) with the 2021 coming Hellcat set to retail from around $85 000 (R1 439 832). Sadly, like with previous generations, it will only be offered with left-hand-drive.