After what will be an absence of eight years, a V8 will become available from next year in the shape of the Raptor R. 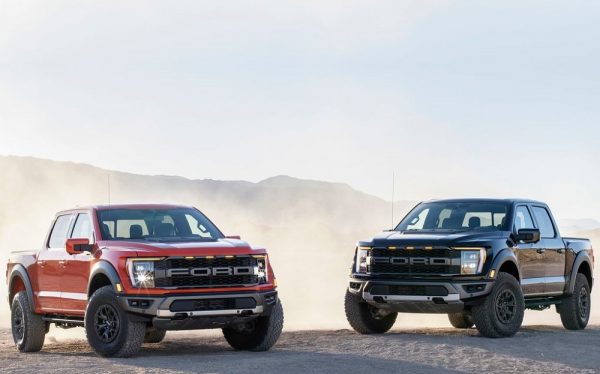 After months of speculative reports, Ford officially unveiled the updated F-150 Raptor overnight with the promise of an even more hardcore next year.

Touted as the “original desert truck” whose popularity and iconic status since 2009 resulted in the creation of the Ranger Raptor for markets outside North America, the Raptor builds on the revisions applied to the standard F-150, but adds a series of bespoke fitting of its own, which on the outside consists of a wider front skidplate, blacked-out grille, a new heat extractor and power bulge on the bonnet, the former said to take inspiration from the intakes of an F-22 fighter jet, new steel front and rear bumpers and three designs for the 17-inch alloy wheels.

Available as only as a double cab or Super Crew in Ford speak, the biggest changes have taken place underneath the skin where the Blue Oval has refined and in some case, completely overhaul the chassis, suspension and dampers with the added option of 37-inch all-terrain as opposed to the standard 35-inch tyres. 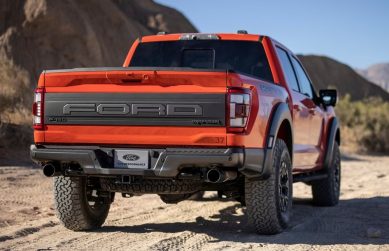 Featuring a redesigned Raptor bespoke five-link rear suspension with longer trailing arms “to better maintain axle position on rough terrain”, the coil springs now measure 24-inches, which Ford claims are the longest in its class, while the dampers and shocks come in the form of long-time supplier Fox Racing’s next generation Live Valve with position sensitive damping detection and better heat resistant build-up.

Made out of anodised aluminium and measuring 3.1-inches, again one of the largest fitted to a production pick-up, the shock bodies are filled with a low friction fluid claimed to reduce “frictional losses inside the damper for improved off and on-road comfort”.

Fitted as standard with an electronically locking rear differential with the added option of a Torsen limited slip differential at the rear, the Raptor also boasts new mounting points for the rear control arms, a chassis constructed out of box section high-strength steel and ‘military-grade alloy’ and taller shock absorbers towers. 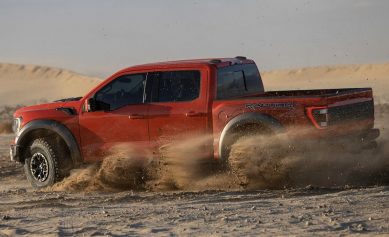 As mentioned, two wheel sizes are offered, both sourced from BF Goodrich, with the fitting of the 35-inches resulting in a ground clearance of 305 mm, departure angle of 23.9 degrees, approach of 31 degrees and breakover angle of 22.7 degrees. Opt for the bigger 37-inch rubber, the claimed clearance increases to 333 mm, the departure angle to 24.9 degrees, approach to 33.1 degrees and breakover to 24.4 degrees. Also new is a larger exhaust system with a so-called x-pipe in a “trombone loop” whose volume can be adjusted via four sound modes; Quiet, Normal, Sport and Baja.

As before, the Raptor keeps the Terrain Management system with seven modes; Slippery, Normal, Tow/Haul, Sport, Rock Crawl and Baja, but adds the off-road optimised cruise control-like Trail Control system, as well as the ability to drive off-road using only one pedal.

Boasting a payload of 635 kg and towing capacity of 3 720 kg for a braked trailer, the Raptor is once again motivated by the twin-turbocharged 3.5 EcoBoost V6, although no power figures were released. Reports are that it will feature an increase over the previous model’s 336kW/692Nm. Drive once again goes to the rear or all four wheels via the General Motors co-developed ten-speed automatic gearbox.

In-line with reports dating back to 2019 though, the Blue Oval has announced that a V8 option will be added next year in creating the Raptor R that will take on the supercharged V8 Ram 1500 TRX. It however declined to go into any details about the first bent-eight Raptor since 2014.

Going on sale in the North American summer, the Raptor is expected to carry a small premium over the outgoing model’s $56 440 (R847 331) sticker price, but despite interest remaining as strong as ever for it and the standard F-150, no plans are currently in place to offer it with right-hand-drive.