Suspects snack on pâté in victims’ house before farm attack

Three suspects brazenly sat down at the kitchen table and helped themselves ahead of a brutal attack against a KZN couple. 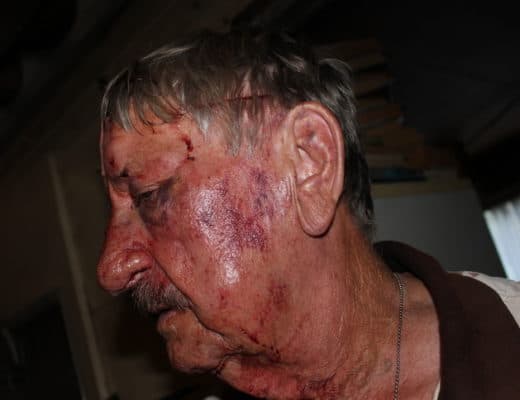 Bloodied and broken, Bruce Harvey could do little against the brutal gang attack.

It was an afternoon of hell for an elderly Heatonville couple who became victims of a farm attack yesterday afternoon in KwaZulu-Natal, Zululand Observer reports.

It is believed the three suspects, after rummaging through their house, brazenly sat down at the kitchen table and helped themselves to cheese and liver pâté before their victims arrived home.

At about 5pm, Bruce and Denise Harvey of Plaas Nie te Koop farm in Heatonville arrived home from town. Bruce attended to his generator outside while his wife Denise entered their home.

Once Denise entered she noticed their fruit bowl had been moved before a man appeared from behind the door, grabbed her, forced her into the bush and sat on her in an attempt to keep her from getting away.

At the same time, another suspect attacked Bruce while he was bending over. The suspect jumped on Bruce and stabbed him with a screwdriver in his elbow.

Another suspect joined in on the attack and both began dishing out hefty blows to Bruce’s head and face.

After they robbed him of his cellphone, the suspects escorted Bruce upstairs to one of the rooms where they told him to show them where he kept his firearms and safe.

“They showed me bullets and told me they found them in my room, and that wasn’t possible because I don’t own firearms.”

They kept on hounding him to “tell the truth” while repeatedly hitting him with a screwdriver and threatening by waving a cleaver in his face; the two suspects then demanded the PIN code for his bank account, to which he obliged.

Eventually the suspects got Bruce’s car keys from his wife and made off with his white Fiat Uno.

The Empangeni Flying Squad and Security 4-U were then dispatched in an attempt to chase down the vehicle.

Meanwhile, Larry Erasmus of Empangeni Farmwatch told the ZO that together with the police they are hoping to bring the suspects to book.

“We regret this type of incident and strongly recommend early warning alarm systems to be in place to avoid these types of incidents. However, we will help in any way possible to ensure these suspects are caught.”