In the video, the boy is alleged to have locked himself in the men's bathroom with the young girl. 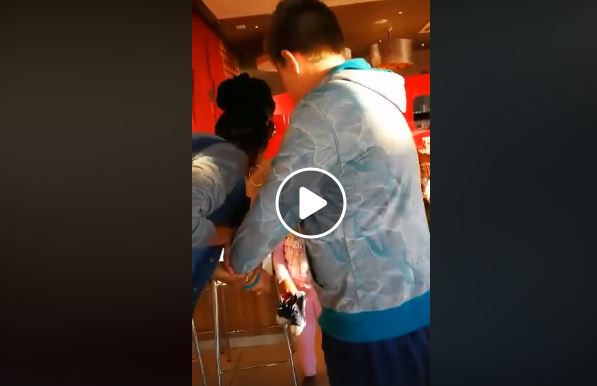 A strange video of a boy allegedly caught in the men’s bathroom behind a locked door with a little girl has surfaced. The footage shows a woman with a firm grip on the boy, inside a Wimpy questioning why the boy had his pants off with a six-year-old girl in the men’s bathroom.

The police said on Saturday that anyone sharing the clip on social media was committing a crime since the identities of minors subjected to crimes, particularly those of a sexual nature, should always be kept anonymous.

The boy, believed to be around 11 years old, said the little girl wanted him to kiss her.

When the six-year-old is asked what happened, she replies that the boy wanted to “pee pee” on her.

A voice in the background, believed to be that of the mother, can be heard shouting why the boy was behind a locked door in the men’s bathroom with her daughter.

She demands police to be called.

“No, I cannot find my child undressed – with you –  in the men’s toilet.

“When I knocked there, Zoe says hello, this one [the boy] says I’m busy in the bathroom.

“This one [Zoe] is responding,” while the boy said he was busy, the mother says in an angry tone.

The boy replies: “She wanted to kiss me. She asked me.”

He maintains he only wanted to use the bathroom.

The mother questions why he locked the bathroom door and the boy insists it was the girl’s choice to do so.

Note: It was still unclear where the footage was taken or if the boy committed a crime. This is a developing story.