The Proteas adopted a radical approach in 2007's tournament ... one that, ironically, exposed their inflexibility too. 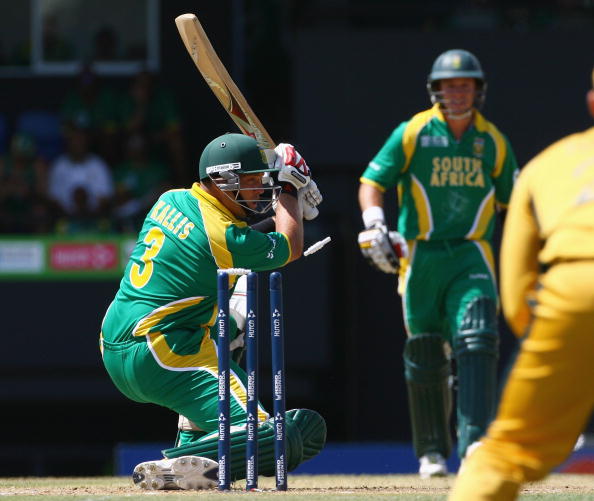 Jacques Kallis of South Africa is bowled by Glenn McGrath of Australia during the ICC Cricket World Cup Semi Final match between Australia and South Africa at the Beausejour Cricket Ground on April 25, 2007 in Gros Islet, Saint Lucia. (Photo by Shaun Botterill/Getty Images)

A glaring illustration of the best-laid plans being laid to waste was the Proteas’ 2007 World Cup odyssey to the Caribbean.

As always, the South Africans attracted the lion’s share of publicity, especially after Ricky Ponting’s Australians were seemingly written-off following a 3-0 humbling in a one-day series against New Zealand that preceded the tournament.

While the high expectations remained, then coach Mickey Arthur – and he needs to be lauded with this – at least seemed to go into the tournament with a plan.

The famous 438-match at the Wanderers had set into motion the new buzzword in the South African game – “brave cricket”.

That became evident in the build-up to the Island festival as emphasis was put on playing adventurous cricket, no matter the context.

Justin Kemp smashed an 89-ball hundred from number seven against India after the Proteas were 76/6 at Newlands.

AB de Villiers was asked to open the batting in an attempt to complement Graeme Smith, who was perceived to be hampered by the unlucky if somewhat slow-scoring Boeta Dippenaar.

He responded with three fifties in four innings against Pakistan and in the same series, South Africa hammered 392 in a game at Centurion.

But to consistently deliver “brave cricket”, Arthur felt there needed to be consistency in selection – another hallmark of the planning process towards the showpiece tournament.

Throughout the 2006/07 summer, the selectors picked the same 15 that would do duty in the World Cup.

Superficially, it all pointed to some refreshing revitalisation within the national set-up.

The Proteas were finally evolving; they were employing a “radical” way of thinking about their game.

“Brave cricket” was showcased throughout the tournament as evidenced by totals such as 353 in 40 overs against the Netherlands and 356 against the hosts, where De Villiers batted on one leg during the latter part of a whirlwind 146.

But the Proteas were dogged by inconsistency.

They lost to New Zealand, Australia (twice) and, rather embarrassingly, to Bangladesh.

In the group game against Ponting’s eventual champions, the first instance of inflexibility showed.

St Kitts produced a belter of a strip on a small field and South Africa thought they could send in the Aussies and bank on repeating the 438-feats.

Instead a breathtaking, bullying Matthew Hayden targeted Shaun Pollock and bulleted his way to a 66-ball century, a World Cup record.

At no stage did South Africa remotely attempt to contain the Aussie effort, almost smugly letting things drift as if they felt anything would be chaseable.

378 was the eventual target and while the chase started superbly, when wickets fell, South Africa didn’t adapt.

Fast forward to the return showdown in the semifinals.

Sent in to bat, the Proteas applied their philosophy to the hilt and brought the “reward” of being five down for 27.

“I don’t think we played reckless shots and threw our wickets away,” Arthur said afterwards.

His captain was equally unperturbed by the apparent recklessness of the plan.

“We felt we could be quite aggressive upfront today. But once we went three down, it became really difficult to wrest the initiative back.”

Even worse was to follow as Smith admitted the plan was to bowl first.

“It was a decision based on information we had received about local conditions and on talking to teams that had played here,” he said.

The spin cut absolutely no ice as the revelation of the toss-plan only served to confirm that the Proteas never really had a plan-B.

To their credit, the duo took the criticism in their stride and went back to the drawing board.

Little more than a year later, the Proteas were toppling the Aussies in their own backyard.

If only it had been the case in the Caribbean.