Even a legendary former England skipper feels the Protea quick's sanction is ridiculous. 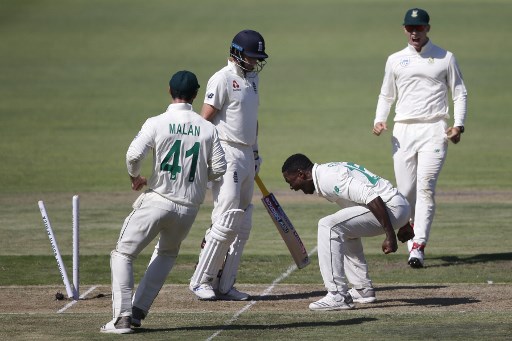 Kagiso Rabada’s suspension for the final Test between the Proteas and England at the Wanderers next week drew predictable ire from various cricket fans on Twitter.

The dynamic quick was handed a fourth demerit point within a two-year period by the ICC on Friday after the match officials at St George’s Park in PE, where the third Test is currently being played, deemed his celebration of English captain Joe Root’s wicket too provocative.

Even a legendary former England captain was aghast with the decision.

So Kagiso Rabada gets suspended for celebrating a wicket… Buya manje father God!

That Kagiso Rabada celebration was inspired by passion, and the fact that he'd just bowled out a big wicket. I still don't get why he is fined for admiring a white man's shoes in his celebration #SAvsENG pic.twitter.com/XNfxcOfKyr

@ICC desperate to kill test cricket. @KagisoRabada25 out of the 4th test because he celebrated too vociferously. Pathetic.#SAvENG #KagisoRabada #ProteaFire #England #barmyarmy pic.twitter.com/0zsG3MYS40

"From now on, the game of cricket shall be played by robots. Humans have emotions. Emotions are no good" ~ @ICC's Andy Pycroft, following revelations that Kagiso Rabada has emotions.

I just don’t get it. #KagisoRabada pic.twitter.com/dXNpqEJFRm

You must be emotionless

you have an absolute star in kagiso rabada that everyone is excited to watch, and yet they still look for every miniscule excuse to keep him out of the game.

Some users, quite rightly, pointed out how Rabada’s sanction could carry the same severity as Jos Buttler’s expletive-laden rant about Vernon Philander at Newlands…

@ICC So Jos Buttler can unleash a string of four letter words at Vernon Philander on camera and nothing happens but Kagiso Rabada celebrates a wicket and he gets banned? https://t.co/5ZfQb4lVjU

There were some who, also rightly, pointed out that his suspension actually relates to previous behaviour too…

kg rabada isn’t being banned for his celebration of joe root’s wicket, he’s been banned for accumulating four demerit points over the course of two years. thanks for coming to my TED talk

Translation: Kagiso Rabada needs to calm the fuck down

There was one measured voice in the debate…

The decision to ban Kagiso Rabada is very bad for South Africa, world cricket and Kagiso the man.
I need to state that there is absolutely nothing wrong with the ICC sanctioning players whose conducts is not in line with the game's spirit.#SAvENG

And, just to point out the wider implications of this issue…

Kagiso Rabada banned for the next Test.
Does that mean Temba Bavuma needs to come back?
Only in South African cricket does a ban for a bowler mean they might have to recall a batsman. #SAvENG