South Africans have warned Cardi B to stay away from two celebrities. 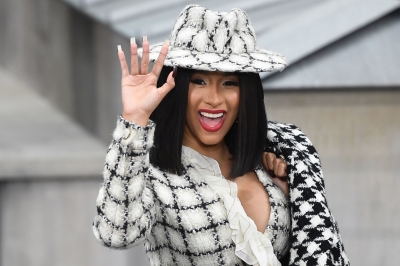 US rapper Cardi B waves as she arrives prior to the Chanel Women's Spring-Summer 2020 Ready-to-Wear collection fashion show at the Grand Palais in Paris, on October 1, 2019. (Photo by Christophe ARCHAMBAULT / AFP)

US rapper Cardi B and Castle Lite have confirmed that she will be this year’s headline act in an event set to take place on 12 June at the Ticketpro Dome.

Official tickets go on sale on 21 February and start at R690.

The rapper took to social media to share the exciting news and further asked South Africans to share a few facts about the country that she should know.

“South Africa!! Chioma B is coming!!! Teach me more bout your country in the comments.”

Said Krayzi_K: “The song to know, is called SISTA BETINA!!! drop this in your performance and watch the world shake,” while Tumi Sole said: “There’s something called Sunday Twitter & it’s a movement. Also, ‘Dumelang’ is a greeting.”

Your other name is Rakgadi B (aunty B)

Here you will not be Chioma! You are KHADI B

Okay a few things you need to do in SA:

Those are my top 5 culture hacks

Chioma B aside… Down here you meet all the requirements to be called Mbali pic.twitter.com/72b5oQGNqp

The Capital City of South Africa is Pretoria and the official language is Spitori… You cannot come to SA and not visit Pretoria particularly SOSHANGUVE ????????

As soon as you land we’re giving you a new name, Buhle which means beauty. We can’t wait to see your performances!

There's this other person who works at this other company called Eskom, he switches off the electricity of the country. There are stages so stage 2 runs for 4 hours and then there is stage 8 where he comes to your house and blows out the candle. Ookuur pic.twitter.com/YUx4Uxnlo7

Another thing Rakgadi B about Southy is you have to follow back…that’s how it works pic.twitter.com/OsjFCbcCXW

Better learn the word "voetsek" just in case you get chased by the dogs from the hood.

Uncle Israel can be your tour guide, he is a very good handy man. pic.twitter.com/EeFXjU553U