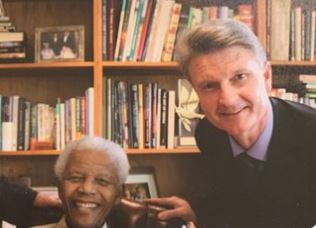 The Nelson Mandela Foundation (NMF) has extended its condolences to the family and friends of journalist Shaun Johnson, who was also an acting chief executive of the foundation when its namesake, the late former president, started scaling back on official duties.

“We are deeply saddened to hear of the untimely passing of Shaun Johnson,” a statement from the foundation said.

Johnson became acting chief executive while also chief executive of another Mandela legacy foundation, the Mandela Rhodes Foundation (MRF). He is said to have carried the load “with ease”.

“He stepped in at a very challenging time for the foundation, just as Madiba was providing the organisation with a new mandate while progressively stepping away from public life. Shaun steered the ship expertly. He did it for Madiba.”

We are deeply saddened to announce that our Founding Executive Director Shaun Johnson passed away on Monday morning. He will be missed by all members of the Mandela Rhodes family: staff, Trustees, supporters, and of course his beloved Scholars. https://t.co/xwiIAp6j8M— The Mandela Rhodes Foundation (@MRF_Africa) February 25, 2020

Professor Njabulo Ndebele, chairperson of the boards of both the NMF and the MRF, said: “Shaun was one of those very rare individuals who combined managerial expertise with creative flair. He was a wonderful storyteller and a deep thinker.”

Johnson was also acknowledged for his work in helping to set up the Cape Town Central City Improvement District, an initiative with private businesses to keep the CBD clean and safe. Chair of the CCID’s board of directors Rob Kane said Johnson’s contribution had been huge.

Shocked and saddened by the untimely passing of the remarkable Shaun Johnson, founding chief executive of @MRF_Africa – gone too soon, my friend – visionary lion of ???????? https://t.co/YSc8E5GaRw

“He was a visionary, who was highly skilled in getting opposing parties to work towards the common good, and we will always remember his eloquence, his sense of fairness and his ‘personable manner’,” said Kane.

“The CCID Board of Directors, its CEO and staff extend their deepest condolences to his wife, Stefania, and their daughter, as well as to his former colleagues at the Mandela Rhodes Foundation.”

Johnson died at the age of 60 on Monday. He leaves behind his wife Stefania and their daughter.