No one asks about Zille’s botox, says Malema in defence of Zuma

Addressing the media during his party elections manifesto launch in Alexandra on Friday, Malema said it was inhumane to expect the former president to be forced to publicise his medical records. 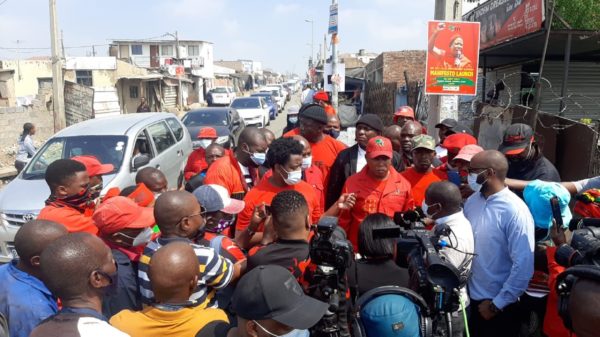 Addressing the media during his party elections manifesto launch in Alexandra on Friday, Malema said it was inhumane to expect the former president to be forced to publicise his medical records.

“[I am] absolutely [happy with the decision to place the former president on medical parole]. Anyone who is sick and and the medical parole committee sits, evaluates the medical condition of any prisoner and they come to a conclusion that this prisoner is terminally sick, it is within their right to release that particular person,” said the EFF leader.

“We must trust our institution, we have full confidence in the medical parole and SANDF and the health department which are looking after the former president. We are not doctors and we’re not going to become doctors today. From where we’re sitting, there is nothing that makes us to suspect a foul play. Zuma has been sick for a very long time and is one such individual or refuses to discuss or talk about his health condition. So it didn’t come as a surprise that Zuma is now being released on medical parole.”

The EFF leader threw shade at Helen Zille and said no one was going around asking about her botox procedures. Zille admitted a few years ago that she had had botox injections to get rid of lines on her face.

“I’m not going to be questioning people’s health and applying to anyone to ask for medical report of Jacob Zuma. We’ve never asked for botox of Helen Zille. No one has ever asked which medical procedure she applied in doing botox. It’s a personal matter.

“Medical issues are personal matters and should remain like that. Let us not set a wrong precedence. Tomorrow it’s you, the other day it’s me. Would I want to be treated the same way Zuma is being treated? That his medical conditions and reports must now be placed in the hands of lawyers of political opponents? We cannot allow that,” said the EFF leader.

Meanwhile, the Jacob Zuma Foundation has pleaded for his supporters to continue donating money for his legal bills.

“Dear friends and compatriots. The legal bills have not stopped. H.E President Zuma appreciates all the contributions thus far and thanks you from the depth of his heart for your contributions. May we request you to please continue with your assistance. The road ahead is still long,” it tweeted on Friday.