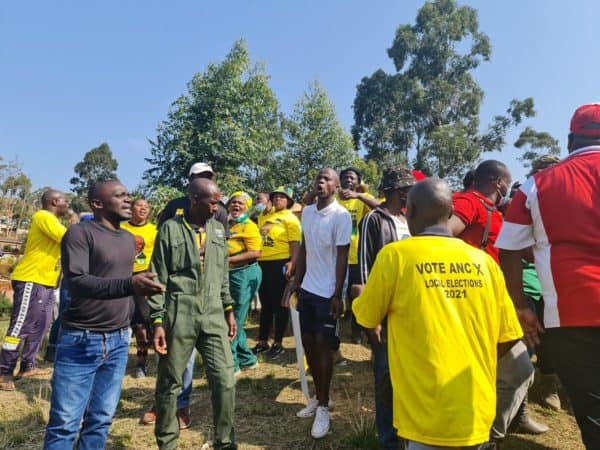 ANC members barricaded the gates outside Thandokuhle Pre-school in Willowfontein, in an attempt to keep the EFF out of the voting registration centre. Picture: Twitter

The three South African children who were killed in New Zealand on Thursday were allegedly strangled with cable ties.

Dr Lauren Dickason was charged with the murder of her three children Liane, 6, and her twin sisters Maya and Karla, aged 2. She appeared in court in Timaru, New Zealand, on Saturday morning after being arrested for the murders on Friday.

Lauren allegedly strangled her daughters with cable ties at their home in Timaru, Canterbury, according to a report in City Press.

A former colleague of Lauren’s husband Graham reportedly said that it was suspected the children had been killed with cable ties.

The family had recently emigrated. According to their social media profiles, both parents are doctors who worked at Pretoria East Hospital before arriving in New Zealand in late August.

ALSO READ: ‘I loved them like my own’, says former nanny of SA children murdered in NZ

The EFF has condemned an incident in Dambuza, KwaZulu-Natal, where what appears to be ANC members attempted to bar the leader of the Red Berets from inspecting a voting station.

The party demanded that the Independent Electoral Commission take action against the ANC for their members’ behaviour.

Scores of people clad in ANC regalia swarmed the centre’s gates just before 14:00 on Sunday afternoon, and tried to intimidate Julius Malema during his visit to the area outside Pietermaritzburg. The EFF leader visited the area as part of the party’s election campaigning.

In videos posted on social media, it is clear the locals were not too pleased with his presence, and the ANC supporters and their EFF counterparts nearly came to blows.

Police have issued a reminder to motorists to remain vigilant, after yet another incident of motorists being attacked after their tyres were punctured by spikes placed in the road.

According to a statement issued by the SAPS, a family was attacked by three men on the R80 highway in Akasia on Friday evening at approximately 21:00.

The victims apparently stopped to change their car’s tyre after hitting what they suspect were spikes place on the road.

Also Read: ‘Hunt is on’ for Gauteng road spike gangs

“It is alleged that as the driver was changing a wheel with the wife standing on the side, they were attacked by three armed men who fired shots at them,” the statement reads.

Anti-vaccine protesters took to the streets of Edenvale at the weekend to march for their freedom of choice, holding placards rejecting the Covid vaccine.

The Worldwide Rally for Freedom organiser Daryl Hardy said the purpose of the rally was to reject the mandate of vaccines and encourage the use of alternative treatments.

“The people are uniting because of the mandatory vaccine; because of the tyranny which was taking place. We’ve been asking [President] Cyril Ramaphosa to show us the virus, because we have great scientists in the country that can resolve it with alternative treatments… it’s illegal to mandate a vaccine,” he said.

Also Read: Ouch! Anti-vaxxers might be forced to get Covid-19 vaccine

“We are seeing countless people with blood clotting and reporting people who have died and are paralysed.

In the spirit of Heritage Day approaching, it would perfect to get a head start and create this delicious, filling and proudly South African Pap tart dish.

This tart can be enjoyed with a side serving of your favourite meat, side salad or roasted vegetables.

For a wholesome and super filling Sunday meal, you can have the Pap tart with all three sides.

Kgalema Motlanthe warns ANC that factionalism is killing the party

The ANC electoral committee, led by Kgalema Motlanthe, presented a hard-hitting report to the party this week. It warned that factionalism between the CR17 and RET groups will lead to the downfall of the ruling party.

The Sunday Times reported that the former deputy president of the ANC and president of SA warned the national executive committee (NEC) this week that the two factions are killing the party.

The report from the electoral committee was critical of the selection process of ANC candidates that will take part in the upcoming local elections. The party missed the deadline in August for the candidate registration process. The ANC was given a reprieve by the Electoral Commission (IEC) and spokesperson Pule Mabe said the party was on track to meet the IEC’s new 21 September cut-off date.

The electoral committee’s report stated that factionalism was a major factor in the ANC not meeting the initial deadline. City Press reported on Sunday that the report claimed that alleged manipulations and transgressions in the selection and election of candidates around the country were to blame.

ALSO READ: ANC facing its most testing election since 1994, despite lifeline

‘The city is poorer without him’: Tributes pour in for Joburg mayor Jolidee Matongo

“Shock and sadness.” That is how the ANC described the death of Johannesburg mayor Jolidee Matongo.

“Comrade Jolidee Matongo’s passing is a great loss to the movement and society at large. We are forever grateful for his selfless contribution to the freedom of the people of South Africa and the enhancement of service delivery within the City of Johannesburg,” said ANC Joburg regional secretary Dada Morero in a statement.

“To this end, the ANC conveys its heartfelt condolences to his family, friends, the City of Johannesburg
and the entire liberation movement. We wish them strength and fortitude during this difficult time.”