The Red Berets say Health Minister Dr Zweli Mkhize ‘abused’ SAHPRA processes by presenting the Sisonke programme as a vaccine rollout when it is only approved for research purposes. 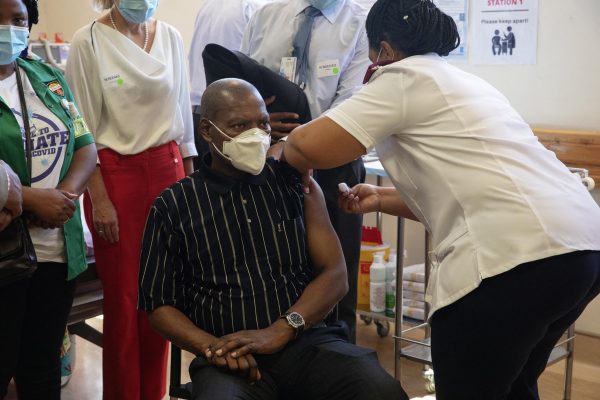 The EFF has accused Health Minister Dr Zweli Mkhize and the government of misleading the nation by representing the Johnson & Johnson (J&J) Covid-19 vaccine as a rollout instead of a trial meant to assess the effectiveness of the shot before it can be administered to the general population.

The party said on Tuesday it was shameful that Mkhize “subverted the ethical process of ensuring that the nation and thus participants in the J&J vaccine trial are made fully aware they are participating in a trial and not necessarily the actual rollout of the vaccine as communicated on public platforms”.

Last month, South Africa kicked off its vaccination drive for healthcare workers under the Sisonke programme using the single dose J&J vaccine. The second batch of 80,000 doses of the J&J vaccine arrived in the country on Sunday.

This followed a setback in the country’s first phase of the vaccination programme after preliminary data from a study showed the Oxford-AstraZeneca vaccine procured by the government gave minimal protection against mild-to-moderate infection caused by the 501Y.V2 variant.

The EFF said it was criminal that Mkhize “abused” the South African Health Products Regulatory Authority (SAHPRA) processes by presenting the Sisonke programme as a rollout when it was only approved for research purposes.

“The EFF thus calls on the minister of health to cease the misleading of the nation and publicly declare that the Johnson & Johnson vaccine is yet to complete the trial phases and official approval by SAHPRA,” said EFF national spokesperson Vuyani Pambo in a statement.

“The minister must categorically make clear that Johnson & Johnson is still undergoing a research process for which SAHPRA has approved as is other vaccine trials currently in South Africa. Minister Zweli Mkhize must clarify that the current phase 3B that Johnson & Johnson is undergoing is meant to assert evidence based outcomes of effectiveness, considering the peculiarity of the 501Y.V2 [variant] that is currently dominant in South Africa.”

To save the nation from the consistent “mistruths and manufacturer bias” the minister has allegedly displayed, the EFF said Mkhize should be removed from office with immediate effect.

“South Africa deserves to know that the supposed phase one of the vaccine rollout, is yet to materialise under the reckless and captured leadership of Cyril Ramaphosa,” the party said.

President Cyril Ramaphosa announced on Sunday the government had secured 20 million doses of the Pfizer vaccine, which is expected to be delivered from the second quarter of the year. Additionally, 12 million vaccine doses have been secured from the UN’s Covax facility.

Read the EFF’s full statement below:

Covid-19 treatments: What works, what might and what doesn't
6 hours ago
6 hours ago

Covid-19 treatments: What works, what might and what doesn't
6 hours ago
6 hours ago