We are not going to call police on anti-vaxxers, says Mabuza

'Our people do understand, they're reasonable. But the problem is fake news.' 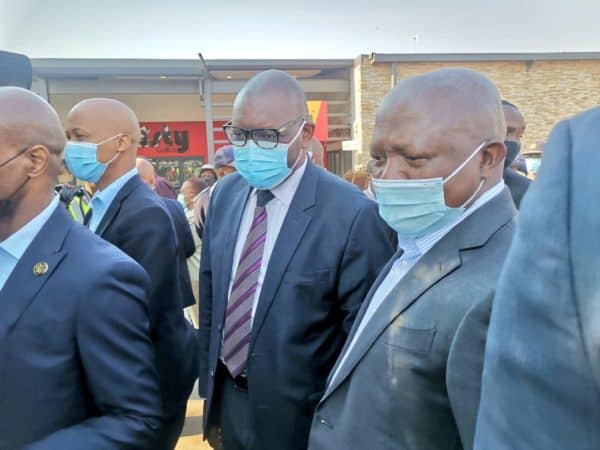 Deputy President David Mabuza says he does not believe that law enforcement agencies should deal with anti-vaxxers who spread fake news and conspiracy theories about Covid-19 vaccines.

Mabuza says government should instead continue to educate and persuade citizens to get vaccinated rather than prosecute citizens pushing fake news on social media.

“I don’t think that we should be enlisting the support of law enforcement agencies. I think we need to get our scientists, experts, nurses and doctors to explain more and more [about the vaccines].

“Our people do understand, they’re reasonable. But the problem is fake news,” he said.

The deputy president was speaking to the media on Thursday on the sidelines of his visit to Mogale City, in the West Rand. He embarked on an outreach programme to encourage more people to vaccinate.

The West Rand has been identified by the Inter-Ministerial Committee (IMC) on Covid-19 vaccines as the lowest-performing sub-district in Gauteng, with only 8% of the total population vaccinated.

Mabuza said if people have any concerns about the efficacy of vaccines, they should approach healthcare professionals to put their minds at ease, instead of relying on unverified reports.

He said government should also improve its communication strategy about the jabs to ensure people who are hesitant to get vaccinated get the correct information.

“So, how do you deal with fake news? [It] is to come with the correct news so that you help people to understand better why they should vaccinate.

“We are not going to call the police but we are going to go to our people… our strategy now is to go to the people and not sit at our vaccinations sites and wait for people to come. Let’s go there and talk to them,” Mabuza said.

On Monday, Health Minister Joe Phaahla told MPs law enforcement agencies should investigate whether some of the fake news were in contravention of lockdown regulations.

“In the [Disaster Management Act] regulations there is clearly a provision which says circulating fake news is actually a criminal offence.

“I think working with the Department of Cooperative Governance and Traditional Affairs and other law enforcement agencies we’re going to have to look at that,” Phaahla said.

He was speaking during a briefing to the National Council of Provinces (NCOP) on government’s national vaccination programme.

Gauteng Premier David Makhura, who joined Mabuza on his outreach programme on Thursday, said he agreed with him that the public should be better informed about vaccines.

Makhura said Gauteng was aiming to inoculate 10.4 million adults and more than three million jabs have so far been administered in the province.

“The only way to deal with fake news and hesitancy, they say fight fire with fire. Bring better information against bad information and fake news.

“We can’t send the police. Fake news can only be fought with better news with more accurate information [and] that’s what communities need,” he said.

Makhura said they were working with mining companies in the West Rand to get more people vaccinated. He said this included door-to-door community mobilisation, the training of vaccinators as well as mobile pop-up sites close to where people live.

“We have a lot of mineworkers who are working in the mines and we have vaccination sites in those workplaces. That campaign is going very well in terms of how many people are vaccinating daily,” he said.

Mabuza said the IMC on Covid-19 vaccines, which he chairs, was aiming to vaccinate almost 40 million people in the country by 31 December.

As of Wednesday, more than 12 million people had received their jabs in South Africa.

READ NEXT: SA’s vaccination drive still aimed at adults only, no children yet, says Phaahla

'People must vaccinate,' urges woman who lost both parents to Covid-19
8 hours ago
8 hours ago

'People must vaccinate,' urges woman who lost both parents to Covid-19
8 hours ago
8 hours ago