At the prestigious Royal Ascot horse races, organisers said they were considering relaxing the strict dress code for the first time. 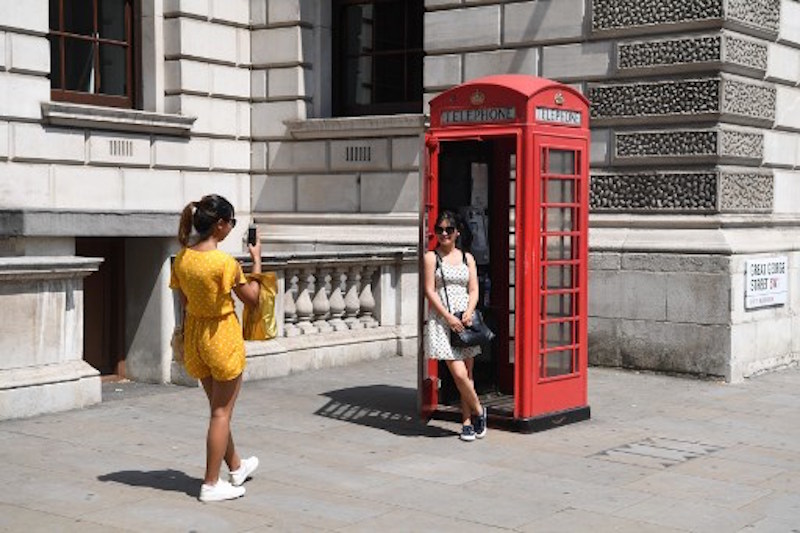 Tourists pose for a photograph in a Telephone Box in the hot weather in central London on June 21, 2017. Europe sizzled under a continent-wide heatwave on June 21, with London bracing for Britain's hottest June day since 1976 as Portugal struggled to stamp out deadly forest fires. / AFP PHOTO / Paul ELLIS

Europe sizzled in a continent-wide heatwave on Wednesday, with London bracing for Britain’s hottest June day since 1976 as Portugal battled to stamp out deadly forest fires.

More than 1,000 firefighters were still fighting to control the flames that broke out in central Portugal at the weekend, killing 64 people.

Cooler weather was aiding their efforts, but thermometers were still hovering around 35 degrees Celsius (95 degrees Fahrenheit) — a level matched across oven-like swathes of Europe, including Italy, Austria, the Netherlands and even alpine Switzerland.

Two forest fires have also broken out since Sunday on Croatia’s southern Adriatic coast, prompting the authorities to evacuate 800 tourists, though the blazes have now been brought under control.

“We were scared, it’s true,” a Swedish tourist who gave her name only as Karolina told local media. “From the hotel room window it seemed like the fire was at our doors.”

As the northern hemisphere marked the summer solstice, firefighters were on alert in Austria, where revellers were due to celebrate the longest day of the year by lighting bonfires for the festival of Saint John.

In Italy, forecasters say the current heatwave could turn out to be the most intense in 15 years, with temperatures around eight degrees above the seasonal average — 39 degrees Celsius in Milan and up to 30 in the Alps at an altitude of 1,000 metres (3,300 feet).

A study released Monday warned that deadly heatwaves will become more and more common around the world even if the rise in temperatures is capped at 2.0 degrees Celsius as targeted by the Paris Agreement to combat climate change.

“Even if we outperform the Paris targets, the population exposed to deadly heat will be about 50 percent by 2100,” Camilo Mora, lead author of the study published in the journal Nature Climate Change, told AFP.

Britain was set to see its first five-day stretch of temperatures over 30 degrees in June since 1995. The thermometer was forecast to hit 34 Celsius in west London, a record for the month since 1976.

In Guildford, southwest of the capital, a road surface melted on Tuesday, with motorists likening it to a bar of chocolate left out in the hot sun.

At the prestigious Royal Ascot horse races, organisers said they were considering relaxing the strict dress code for the first time. 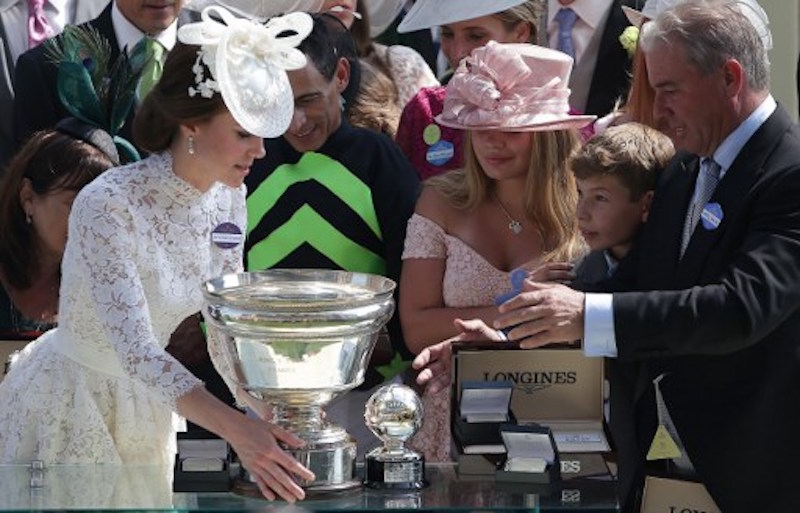 Britain’s Catherine, Duchess of Cambridge (L) presents Puerto Rican-born American jockey John Velazquez (2L) with the trophy, after he rode Lady Aurelia to win the King’s Stand Stakes horse race on day one of the Royal Ascot horse racing meet, in Ascot, west of London, on June 20, 2017.
The five-day meeting is one of the highlights of the horse racing calendar. Horse racing has been held at the famous Berkshire course since 1711 and tradition is a hallmark of the meeting. Top hats and tails remain compulsory in parts of the course while a daily procession of horse-drawn carriages brings the Queen to the course. / AFP PHOTO / Daniel LEAL-OLIVAS

And a thunderstorm was looming over the Glastonbury Music Festival, threatening mud just as an expected 200,000 revellers begin pitching their tents.

Music lovers in France were also braving the heat, as the annual Fete de la Musique — a nationwide celebration with thousands of free street performances — kicked off under an official heatwave declared across many areas of the country.

The national postal service announced that its postmen would be calling on elderly and disabled residents living alone to check they were alright, with temperatures due to hit 37 Celsius in Paris.

A peak in pollution linked to the heat prompted police in the Paris region to reduce speed limits in some areas and divert heavy goods trucks, with the most polluting vehicles banned from the capital on Thursday.

On Tuesday, the body of a 31-year-old man was pulled out of the Loire river in the central city of Tours after he got dragged down by the current while trying to cool down.

In Russia, Siberia was also suffering a heatwave, with temperatures of up to 37 Celsius in the city of Krasnoyarsk, Channel One television reported.

But at the other extreme, it was just one degree Celsius and snowing in Murmansk in northern Russia, the RIA Novosti news agency reported. Many residents are having to get by with no heating in their flats as centralised systems have been switched off for the summer.