Insurgents have been wreaking havoc in Cabo Delgado since 2017, with attacks escalating over the last year. 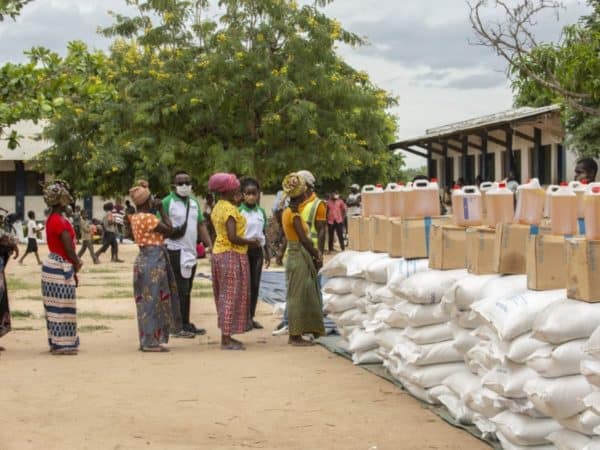 Food packages are distributed at the site for displaced families from Ibo, Mocimboa Da Praia, and Macomia places that have been attacked by armed insurgents in the last two years north of the province of Cabo Delgado. Alfredo Zuniga / AFP

Insurgents have been wreaking havoc in Cabo Delgado since 2017, with attacks escalating over the last year.

The gas-rich region has been ravaged since militants linked to the Islamic State group launched an unprecedented raid in March, killing dozens and forcing tens of thousands to flee.

WFP is urgently appealing for $121 million to support the affected people until the end of this year, but warns that it could see itself rationing or completely halting food assistance in August if no additional funds are received.

“The conflict has destroyed people’s jobs, lives and hopes for the future,” WFP’s director David Beasley said on the back of his recent trip to the province which borders Tanzania.

“These innocent communities are now completely reliant on WFP and our partners to provide them with life-saving food,” Beasley said, in the statement.

At least eight in 10 displaced Mozambicans move in with family, friends or strangers, according to humanitarian aid agencies, piling pressure on communities already battling high food prices and income losses due to the coronavirus pandemic.

In March, nearly 228,000 people were highly food insecure — with a projection that this will increase to 363,000 in October.

Children are most affected, with some 75,000 aged five and below suffering from acute malnutrition, according to data cited by the food agency.