If Sanco wants to cut truck accident deaths, it simply should demand that any lorry that breaks down on a public highway be seized and towed away for roadworthy checking. 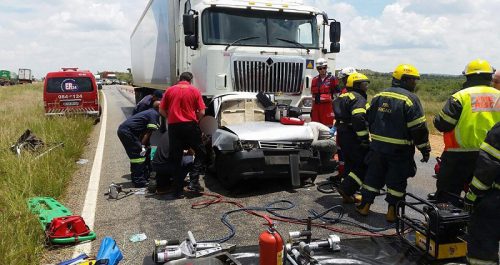 Truck owners have been warned that they will be compelled to take personal responsibility for road accident carnage that their employees cause.

The warning, from an activist organisation, was triggered by a spate of truck-related disasters over the past month.

Our road accident statistics, in general, are appalling, with transport-related injuries among the 10 biggest causes of death in South Africa. In 2016, just over 14 000 people died on the roads.

The demand that truck owners start taking responsibility for accidents involving their employees and vehicles comes from the SA National Civic Organisation (Sanco). It speaks with the self-assured authority of so many of these ANC-supporting entities.

Yet, one doubts that the truck owners are quaking in their boots. Like so many of the alphabet soup of entities that coast in the slipstream of the ANC, Sanco’s power is illusionary.

It, noticeably, is also schtoom about the road havoc caused by the minibus taxi industry. An Automobile Association study found there are 70 000 minibus taxi crashes a year – double the rate of crashes for all other passenger vehicles.

But despite the hand-wringing about South Africa’s grisly road accident toll, government lacks the courage to take on the trucker and minibus taxi mafias. For these two groups are the prime shapers of the problem.

All the many identifiable direct causes of road deaths have their genesis in a lack of law enforcement. And that lack, in turn, has its origin in the ANC pandering to those two powerful special interest constituencies.

There is no point in traffic officers fining taxi drivers and truckers when the owners of the vehicles refuse to pay.

There is no room for honest road traffic enforcement when corruption is not only rife, but there is no effort to curb it.

Also, government’s Road Traffic Management Corporation (RTMC) is ineffectual beyond satire. With a budget of R659 million in 2015, which it overspent by R180 million, it is just another mechanism to extract money from the pockets of taxpayers and move it to deployed ANC cadres.

The RTMC last issued its “annual” report on accidents in 2011. Its most recent corporate annual report does not even identify cutting road accident deaths as a strategic objective.

The RTMC is, however, meeting its strategic objectives on race transformation in the workplace. How pleased its political masters must be. Ordinary citizens, not so much.

If Sanco wants to cut truck accident deaths, it simply should demand that any lorry that breaks down on a public highway be seized and towed away for roadworthy checking. That repeat offences incur hefty fines. That truck and taxi speedsters are monitored by cameras in real time and pulled off to be fined or imprisoned.

If Sanco wants to stop licence fraud and ticketing corruption, it simply could demand that fake offenders, wearing audiovisual recording devices, are sent out to entrap crooked cops and roadworthy centre officials.

None of this is rocket science. It’s about caring enough about South Africa to seize the flailing hydra of corruption, incompetence and government-blessed immunity that drives road deaths.