Ndlozi says EFF is ‘not scared’ of the army, will disrupt Sona

Ndlozi also warned the army, saying the party would defend the constitution against anyone. 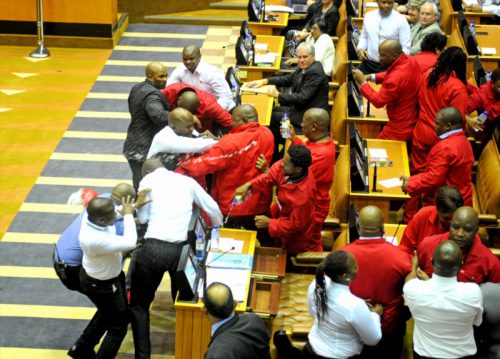 scuffle between Economic Freedom Fighters MPs and Parliamentary Protection Services during President Jacob Zuma's 'Question and Answer' session in Parliament on May 17, 2016 in Cape Town, South Africa. Speaker of the National Assembly; Baleka Mbete defended her decision to call in security to deal with the EFF in line with rules that were adopted by most political parties in Parliament last year. (File photo by Gallo Images / Beeld / Lerato Maduna)

We are not scared of them, said the Economic Freedom Fighters (EFF) national spokesperson about the deployment of the army at this Thursday’s State of the Nation address (Sona).

“We will be inside the Assembly to hold Zuma accountable, as we always do,” Ndlozi told The Citizen.

“If he is there, he must know he has to be held accountable in terms of the Constitutional Court judgment that says he has broken his oath of office.”

Ndlozi warned the army, stressing the EFF would defend the constitution against anyone.

Early on Wednesday, the party had condemned the deployment of the army, saying it had no place in the maintenance of law and order because police had been given such a mandate.

READ MORE: Zuma ‘planning to murder those he disagrees with’

“The military are people who get deployed for war and whose training is about killing the enemies of the state,” he said. “We know for sure that this initiative by Zuma is done to intimidate the media and the EFF.

“Zuma no longer has confidence in the rank and file, including police captains, to execute his illegal decisions and instructions.

“The president now hopes to use the army to suppress opposition to his illegitimacy as a constitutional delinquent.”

Meanwhile, there was a huge police presence in and around parliament on Wednesday, while some officials were seen busy with the logistical preparations.

During last year’s address, Zuma’s speech was delayed for about an hour, as he was constantly interrupted. It appears the same is likely to happen on Thursday night – if the EFF has its way.

Zuma had previously repeatedly spoken out against disruptions in parliament.