Only Zuma can take SA out of its state of paralysis, says Madonsela

The former public protector said she could not dictate to any political party regarding whom it deploys to parliament. 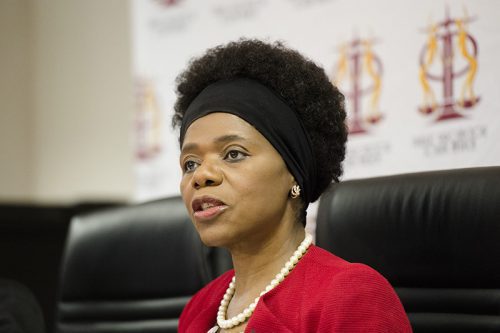 Only President Jacob Zuma can take South Africa out of its state of paralysis, according to former public protector Thuli Madonsela.

Madonsela was reacting on Thursday to the swearing in as an ANC member of parliament of former Eskom CEO Brian Molefe.

Late last year, before ending her seven-year term of office, Madonsela – who is presently abroad – fingered Molefe in her report, the State of Capture, which states the former CEO had paid 19 visits to the Gupta brothers at their Saxonwold residence and had regularly communicated with them.

This was at the time of a coal deal between Eskom and Tegeta, which is owned by Zuma’s son, Duduzane, and the Guptas.

“I cannot dictate to any political party regarding whom it deploys to parliament,” Madonsela said.

“In an ideal world, where ethics are central as envisaged in section 195 of the constitution, an elevation to a new office should only take place after a person’s name has been cleared by an appropriate body.”

In the report, Madonsela stipulated that Zuma must appoint, within 30 days, a commission of inquiry to investigate state capture and that it must be headed by a judge selected by the Chief Justice Mogoeng Mogoeng. But Zuma’s decision to take the report on review had affected all parties involved, she said.

“Unfortunately, there is already a four-month delay in the process while the integrity of affected parties, including whistle-blowers and accused persons, remains under a cloud. Only the president can take South Africa out of this paralysis.”

Molefe has accused Madonsela of painting him with a “corrupt brush”, and stipulated that he didn’t think Zuma should resign over the matter and that he would, instead, do so. In recent media reports, he stated he was innocent and that his rights had been trampled on, charging that Madonsela’s report had “no findings”.

“When Chapter 9 institutions trample on other people’s rights, what is the remedy? My concern is that people are jumping on to the bandwagon and throwing petrol into the fire,” he said.

Madonsela said “the news at home often suggests a ship in peril. But it is my considered view that change comes from ructions or disruptions. Our country has solid democracy and rule of law foundations and a great resilient nation with a strong sense of what it wants to become. Because of this, SA’s democracy project is safe and sound.”

She believed “this nation will rise to its full potential and in the process, free the potential and improve the quality of life of all its people while reclaiming its place as a global beacon of hope on democracy and human rights”.

“Even as we speak, our courts remain a shining example as ultimate guardians of constitutional democracy.”

Molefe was sworn in as an ANC MP on February 23.